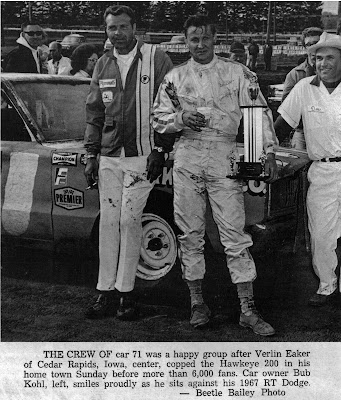 
It’s probable that Sunday’s showing was Verlin’s first and last of the season on The Downs’ half-mile dirt oval. If so, he gave IMCA and local race fans plenty to remember him by.


Eaker started 21st in the 26-car field and was in fast pursuit of the front of the front-running pack led by Ernie Derr after only 30 laps. Eaker was running fourth in his 1967 Dodge behind Derr, Ole Brua and Lewis Taylor.


Derr, the nine-time IMCA national champion, was nearly a full lap ahead in his 1969 Dodge Charger and it appeared the classic might take the usual “follow the leader” pattern. Then the curse of stock car racing happened to none other than Derr.


Ernie had just finished the 35th tour when his engine blew and the Keokuk, , veteran bowed out on the backstretch. The next three cars advanced a position and then Eaker moved into second when pitted for fuel on lap 50.


Brua and Eaker ran one-two for the next 40 laps before Ole’s ’69 Ford blew a tire. Eaker zipped into the lead and enjoyed a lap and a half advantage before Brua rejoined the action. There was no stopping Eaker, now a rookie on the USAC circuit, for the final 110 laps.


“I’m tired,” Eaker mumbled afterwards, as he dragged himself from his car. “Actually, I don’t feel too bad except for my right hand.” Verlin revealed his right palm with a rather large blister that had been ripped opened.


The track crew did an excellent job in readying the track after the heavy rains the previous day. Eaker said it was in “real good shape” throughout the 200 laps.


“You could run almost any place,” he added. “I ran high because I really didn’t know how good the tires were.”


“We didn't have any problems, but the car got a little hot to start with. I slowed down and she came around. Overall, everything handled pretty good”


“Yes, this would have to be one of my greatest days in racing.”


Two other local drivers also did excellent jobs. Fred Horn of finished third in his ’67 and right on his bumper in fourth was Irv Janey of in a ‘67 Dodge. Second place was copped by Ron Hutcherson of Keokuk, the younger brother of former NASCAR great, Dick Hutcherson, in a ’69 .


Janey’s brother, Chuck (‘69 Charger), placed 20th, while Bill McDonough of and his ‘66 Camaro were 24th. Neither was among the 14 cars that were able to finish the race. Brua won the special five-lap preliminary event, barely nipping Derr at the checkered flag.