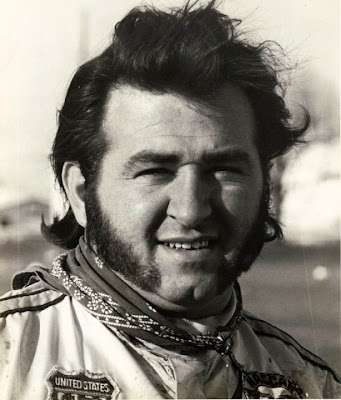 Freeman Spur, (April 13, 1972) - If ever there was a guy with a burning desire to make it big in the world of professional auto racing, it's Chuck Amati.


The short, stocky built guy, who calls Freeman Spur, , and , home, is a 24-hour a day auto racing buff. He loves racing and he can hardly wait until each race day rolls around. Those days away from the track arc a reminder.


Without a doubt, Chuck Amati is one of the best and most popular drivers at the small tracks in the tri-stale area. He’s been a consistent winner at tracks such as , and as well as at tracks in and Indiana.


Like most guys serious about their business - and racing is his business - Amati has ambition. He’s not satisfied with racing at the local tracks, he wants to race at Indianapolis, at Trenton, at Langhorne, at Phoenix, at Du Quoin and all of the other places, on the United States Auto Club schedule.


“I think I'm ready, that I've got the ability of a majority of the guys in big lime auto racing,” said Amati “I won't say that I can outrun A. J. Foyt and Al Unser and Bobby Unser and all those guys, but I think when the ability comes down to car to car and driver to driver, I think I can hold my own.”


So what’s holding the little guy up? Why doesn’t he tackle the big timers?


“Money,” says Chuck. “It takes money to race the USAC circuit. I need a sponsor. I can’t make it on my own. Find me a sponsor and I'll make it.”


Amati, and guys like him, seldom race against the USAC drivers unless they're prepared to give up a year of racing at the non-USAC sanctioned tracks.


“If I race in one USAC race I'm through for the rest of the year at the tracks around here,” said Amati. “Once a driver competes in a USAC race, he can't race in anything except USAC races for the remainder of the year. And right now. I can't afford to do that. I can make a living driving at the small tracks because the expenses are considerably smaller.”


Amati currently has three sponsors who pick up the bills for his racing in the area - an auto dealer, a , motel owner and a truck stop owner.


He and mechanic Kay Fletcher, who worked the wrenches for the late Don Branson, will hit over 30 tracks in several Midwestern and southern states this season.


The season for Amati begins in in February and ends in the in October.


“We traveled about 64,000 miles to races last year but that's nothing compared to what the USAC guys travel,” said Amati. “And we weren’t living high off the hog either. It takes money to race and that's why I need more sponsors or just one or two who could afford the greater expense of the USAC circuit.”


Amati has set two goals for himself this season - winning the Little 500 at , in May and winning the "Blockbuster 50" at Du Quoin, Ill., in July. Chuck finished third in the Du Quoin race last year after experiencing car trouble and did the same in the Little 500.


“If I can win these two races maybe some of the bigger name car owners will pay attention to me,” said Amati. “Maybe then I can get a ride on the USAC circuit.”


Chuck has no trouble drawing attention from the fans at the tracks where he competes and he'll be even more noticeable this season. When he opens the local season at on Saturday night, he’ll be decked out in a bright yellow racing suit covered with peace signs driving a red, blue, white, orange and yellow super-modified racer.


“I want to be different,” said Amati. “I’m tired of being an ordinary race driver. When I win I want everyone to know who won. When I lose, I want people to know who it was that lost.”


Whenever Amati gets a response from the crowd, it really turns him on. “I’m a funny racer,” he said. “I don’t really race for all that much money, though I know that it takes money. But I like to race for people. I love the fans and I love kids and I want the people to be my fans. I want them to know that having fans is what keeps me going.”


Amati, winner of the Hoosier Auto Racing Club Sportsmanship Award last year for pulling a driver from a burning car, has been racing since 1958 and full time since 1969.


“It’s a tough living racing, but I just love it,” he said. “If you love something and that’s what you want to do, then that’s the best thing to do.”


And Chuck Amati plans to continue following his own advice. “I'll never give up on my dream of driving in the 500,” he said. "I've never seen the 500 because I made a promise to myself that I'd never go to the race until the day I drove. The day I see the race, I intend to be driving there.”


And the guy sincerely believes he'll be at someday.


“I know I can compete against the best,” he said, “All I need is the chance.”