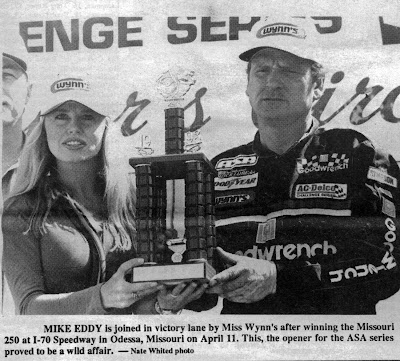 
Sauter led 196 of the first 239 laps in the opening event of the 18-race AC-Delco Challenge Series when misfortune struck.


Coming off of turn four Sauter slipped and Eddy tapped the rear of Sauter’s car. Both cars spun with Sauter hitting the barrier in front of the pit wall. Eddy was able to continue and held onto the lead over a hard-charging Johnny Benson Jr.


Sauter grabbed the lead from Tony Raines on lap 20 and maintained the top spot over Eddy and Benson until the three leaders pitted on lap 154. Benson got around Eddy got around Eddy on lap 162 for the second spot with Jeff Neal settled in the fourth spot.


On lap 163, coming off of turn four, Eddy got underneath Benson and the two touched coming down the front straight. Benson spun and on the restart was posted in sixth position.


“I was getting off the corner a little better than Jay,” Eddy said. “He spun, we both spun – it was a bad deal. I don’t think I’d ever do that on purpose.”


Sauter said Eddy hit hard coming off of turn four, but shrugged it off as racing luck.


“Racing seems to be a contact sport,” he said. “A little more than it should be. I don’t think that’s quite right.”


Benson was a little more vocal in his criticism of Eddy’s driving style.


The race was run in two hours at an average speed of 61.694 miles per hour and was slowed by seven caution flags for a total of 82 laps.