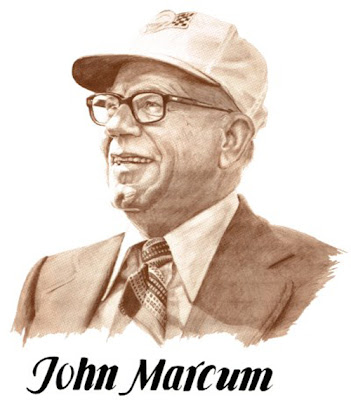 John Marcum of Toledo, Ohio, president of the Automobile Racing Club of America, Inc., is a quiet, neatly dressed, businessman type who doesn't look his 50-plus years. He's the kind you feel you can pass off with "pleased to meet you" and forget - until one of the men who race for him tells you with a straight face the drivers are afraid of him. Then you do a double take.

On second look; he does have a sort of steely glint in his eye and a firm jut to his jaw. And there's no question about who’s the boss of ARCA. He runs it with an iron hand. For instance, he hasn't hesitated to boot out a couple of very good young drivers who abused his strict rule against drinking in public.

Because he enjoys a reputation for fairness with his drivers and with the racing public, he expects his drivers to play just as fairly with him - and with the public. They do. A veteran of 36 years in the racing game as a driver and promoter, he puts real savvy into the ARCA's promotions. All his actions are geared to his motto: "Do your best to give 'em a good show."

Remarkable success has resulted from this creed…