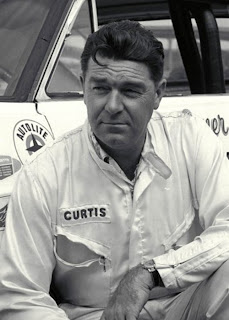 Turner, who last drove in a race at Charlotte Motor Speedway in 1961 before being banished from the National Association for Stock Car Auto Racing (NASCAR), jumped in front on the second lap and never was far out of the lead before taking it for good shortly after the midway point.

Tom Pistone of Chicago, driving another Ford, finished second, Jim Cushman of Columbus, Ohio, finished third in a Plymouth, Dick Freeman of Dayton, Ohio, was fourth in a Pontiac, and Allen Oscar of Saginaw, Mich., was fifth in a Ford.

Turner was banished from NASCAR in 1962 for attempting to organize race drivers for the Teamsters Union. He never has been reinstated.

The crowd of about 12,000 gave the wavy-haired local favorite an ovation as he crossed the finish line more than a lap ahead of Pistone, who also has driven races here under the NASCAR banner.

Turner drove a car owned by Jack Bowsher of Springfield, Ohio. Bowsher, who started on the inside pole next to Turner, made a race of it and led for several laps after Turner made his only pit stop at the midway point. Bowsher went out on lap 103 when he burned a clutch, spun into the rail, and ended up on the apron.

The Midwest drivers, for the most part unfamiliar with high-banked speedways such as the Charlotte Speedway, apparently had trouble handling their cars in the 24-degree banked turns.

One caution flag went out on the fourth lap when Harold Smith, a Ford driver from Dayton, spun into the high guard rail and was hit broadside by Blaine Kaufman of Burton, Ohio. Both drivers walked away unhurt.

Smith hit the rail at almost the exact spot where Jim Pardue, a top NASCAR driver, lost his life during tire tests a month ago. Richard Petty, the NASCAR late model champ, hit the same spot a week ago while leading the National 400 with less than two laps to go.

Another caution flag went out Sunday when Oscar and Kenny See of Erie, Pa., tangled in the second turn. Oscar escaped damage and went on to finish fifth.