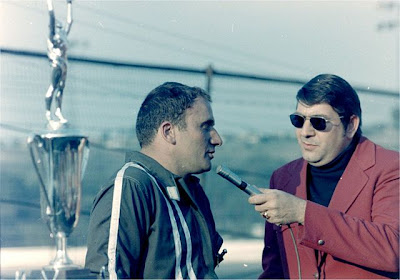 Ed Howe is interviewed in victory lane following his win in the 10th annual Pittsburgher 250 at Heidelberg Raceway.
﻿

Howe, originator of the “Green Hornet” super team of late model racing, became the first two-time winner of the affair as he took the lead from Bob Senneker on the 180th lap and just out-powered the field to win the $4,000 awarded to first place by a 16-second margin.

From the pole position, Maier quickly assumed the lead with Ed Mitchell of Warren, Ohio, and Joy Fair of Pontiac, Michigan, in hot pursuit. By the 10th lap, Gregory, Howe, and Detroit’s Johnny Anderson joined the fracas for the top spot.

The crowd roared their approval as these three and Joy Fair had their fire-breathing, rumbling late models running bumper to bumper and wheel to wheel at speeds of over 100 miles per hour for nearly 20 laps. The duel was halted on the 33rd lap when Fair lost control down the backstretch and was bumped by Tom Colella and Kenny Hemphill.

This accident eliminated Hemphill as he was forced to pit and knocked Fair and Colella out of serious competition.

On the previous lap, Ed Mitchell made his move on Maier to take the lead. John Anderson while running fourth blew a head gasket and pitted on the 44th lap.

The race continued to hold true to form as the top drivers in the nation battled each other. Don Gregory moved to second on the 88th lap by passing Tom Maier, but Ed Mitchell continued to lead the pack.

The big shuffle began on the 93rd lap when Glenn Gault blew his engine and dumped oil in turn one causing the yellow flag to be displayed.

With this caution, the majority of the front runners pitted for fuel enabling Don Gregory to take the lead. Senneker was able to get out of the pits quickly to move into second followed by Tommy Maier.

Gregory, knowing he still had to pit, began to push his racer to its ultimate trying to gel a lead big enough to hold under a caution.

However, when Bob Cooke spun out in turn two and the caution flag was again brought out, Gregory pitted for fuel but could not get back in time and on the 149th lap, Bob Senneker took the lead with Maier and Howe closing fast. Howe moved to second on the 155th lap and following a caution, took the lead for good on the 180th lap.

Meanwhile, Gregory began to move back up into contention and was third after the 193rd lap. However, Gregory met his match in Bob Senneker as they battled right to the checkered flag with Senneker able to hold onto second behind Ed Howe.

A few sidelights to the tremendous action . . . Ed Mitchell, who finished fourth, blew his engine during time trials after turning 20.17 seconds on the half-mile. Marvin Smith of Pataskala, Ohio, has one of the few unique sponsor arrangements in racing. Seventy-five people of Fort Laramie, Ohio, formed a group to back Smith. Two of the best drivers in attendance failed to qualify as both Norm Lelliott of Toronto, Ontario, and Ohio’s Dick Freeman blew engines during practice on Friday. A big disappointment to the fans was the absence of the top late model drivers in the country, Dick Trickle of Wisconsin Rapids, Wisconsin. Trickle, who rarely runs good at Heidelberg Raceway, went to Charlotte, North Carolina, for the NASCAR National 500 and drove a Chevrolet to a fifth place finish behind Cale Yarborough, Richard Petty, Bobby Allison and Benny Parsons.