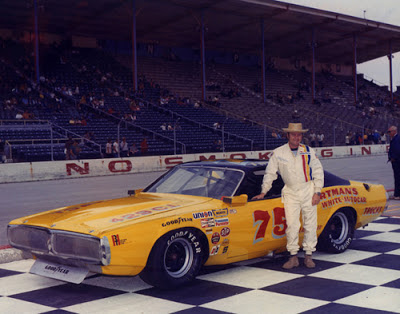 Zanesville, Ohio (October 10, 1974) - There is no telling how many more times Butch Hartman will win the USAC stock car championship.

“We hope we can just keep right on going,” chuckles the 34-year-old South Zanesville driver, who has won the title for an unprecedented fifth consecutive season. Even now he is assisting his father and their crew in preparing cars for the 1975 campaign, assuring that a yellow and black Dodge with a red number 75 on the roof and on each door will be the car to beat next year.

“We plan on operating just about the same way that we have been,” he reasons. “Why risk losing a race by trying something radically different?”

The Hartman family enjoys competing and it enjoys winning. It is something that they have become extremely proficient at, winning almost 50 percent of all USAC stock car races entered the last two seasons.

“I've had some interesting offers,” he admits “but I've turned them all down. I even turned down a championship car offer two years ago because I didn't want to spoil what dad and I had going for us.”

The philosophy has paid off to the tune of something far in excess of $200,000 in prize money in the four years that Hartman has been champion. While not necessarily superstitious Butch does continue to carry number 75 on his car instead of the number “one” to which he is entitled, and a crew member faithfully wore the same pair of sneakers for a whole season believing them to be lucky. Even after being replaced with a fresh pair, the sneakers were carried in the cab of the truck that hauls the car to the races. “We went along with this even after somebody left the window down during a rain storm,” laughs Butch recalling the disagreeable aroma that arose from the exhausted footwear.

Hartman had to come from behind to win his fourth title. He staged a season-long struggle with veteran Norm Nelson of Racine, Wis. who was also striving to become the first man to win the title for a fourth time while Hartman's victories were punctuated with the occasional mechanical malfunction. Nelson finished every race. Nelson was fifth or better in all but two of the 19 races with a seventh and a 10th place accounting for his worst finishes. He scored only one victory, but was runner-up in five events, third in four more and fourth in another five. Hartman won eight races but missed the top five in six races and was still behind Nelson in the point standings with one race remaining.

Hartman and Nelson swapped the point lead back and forth six times before the matter was settled. Hartman was 110 points back with three races to go but pulled to within 30 points by winning the next with Nelson second both times. Butch then won the finale at Des Moines September 14 with Nelson fifth to clinch the title.

No man had succeeded in sweeping all four events at the Milwaukee Mile oval until Butch accomplished the feat in 1973 and he almost did it again this year He had to be content with a seventh place finish in the Thursday fair date event, but succeeded in winning the other three. His lack of a win at the Wisconsin track between 1966 and 1972 has been amended with victorious drives in seven of the last eight stock car events there.

Ramo Stott, Roger McCluskey, Nelson, Jack Bowsher, Irv Janey, Bay Darnell, and numerous others are planning all-out assaults on the USAC stock car title for 1975, but they know it won't be easy. Alternatively, Butch is not taking their challenges lightly. Spectators can look forward to some fine racing in the coming season.