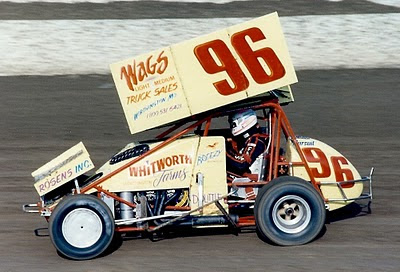 Columbus Junction, Iowa (July 26, 1995) - Although they had the longest journey to reach Louisa County Speedway, Scott Whitworth and Ricky Logan proved to be the fastest.

Whitworth held off Logan for the final half of the 20-lap race to win the Red Dog Open Wheel Special 360 limited sprint car feature Wednesday night at the 4/10-mile oval track.

For his efforts, the Worthington, Mo., driver claimed the $1,000 first prize. Whitworth also pocketed another $200 for posting the fastest time in time trials, again edging Logan for the top spot.

Larry Pinegar of Des Moines was first on the track in the limited sprints time trials. Pinegar posted a time of 19.72 seconds on his second lap to claim the early lead. But Whitworth quickly erased Pinegar’s mark, turning his first lap in 19.43 seconds. That time would be just enough to beat Logan's 19.50.

"That was lucky," Whitworth said. “I drove the car way too rough in the time trials. I just got lucky and it stuck.”

Bob Thompson of Des Moines grabbed the early lead in the first heat race to pull ahead of Whitworth, and then held on as Whitworth nearly overtook him at the checkered flag.

Logan, making the trip from Little Rock, Ark., went low in turn four of lap three to get by Bruce Williams, then blew away the field to easily win the second heat and set up a showdown with Whitworth in the feature.

Whitworth drew the pole position for the feature, while Logan drew a third row starting spot. Logan knew before the race began he had his work cut out for him.

“He started up in front of us,” Logan said. “I drew a third-row starting spot. That made it pretty tough, but I figured with 20 laps I had a chance.”

Whitworth grabbed the lead on the start and quickly opened the gap ahead of Steve Breazeale and Thompson with Logan quickly moving up to fourth.

Logan moved up to third on lap three, and then got past Breazeale in turn four of lap nine for second place. But Whitworth had already pushed his lead to nearly the length of the front straight. Logan caught a break three laps later when Jeff Haines spun out in turn two, bringing out the yellow flag.

But once again, Whitworth grabbed the lead on the restart and began to pull away. He seemed set for victory as he took the white flag with Logan lurking in the distance.

But there was a tense moment just seconds later. Williams and Breazeale got tangled up coming out of turn four of lap 19. The violent collision sent Williams’ car airborne, rolling and flipping before coming to rest on its side in the front straight. Breazeale’s car spun several times before coming to a halt in the turn.

An ambulance and rescue squad rushed to the scene. Both drivers escaped without injury, although Williams' car sustained major damage. Both were through for the night.

With two laps remaining on the restart, Whitworth once again got the jump on Logan off the start and held on for the win. Pinegar finished third while Terry Alexander was fourth. Bart Schneiderman of Burlington moved up four spots to grab fifth place. Scott Newman, racing a new motor for the first time, moved up three places to finish seventh. West Burlington's Ned Fry finished ninth.

“I’m really happy,” Whitworth said. “We have a lot of fun coming up here. We usually come up here and run with the 410’s. That’s always a blast, so I thought we’d just keep coming back.”

“I didn’t know if I would be able to hold (Logan) off. You never know. I was just hoping like hell I could. Where I was at I couldn't tell what kind of lead I had. I didn't know if I was gaining or losing. I was glad I was able to hang on.”

“(Whitworth) was running pretty fast,” Logan said. “It was faster up on top, but that made it harder to pass.”

Herring, a second-year driver from Lone Tree, claimed his first win ever in the modified feature race.

Herring finished second in his heat race behind Bruce Hanford of Davenport, but was able to turn the tables in the feature. Herring grabbed the lead on the start of the 15-lap feature with Terry Schrader close behind.

But Schrader slammed the wall in turn three of Lap 4, taking him out of the race and bringing out the yellow flag.

Herring took the lead on the restart as Hanford and Steve Boley closed in behind. Herring then pulled away in the ensuing laps and won the race handily. Hanford held off Boley to claim second.

“It was real nice,” Herring said. “I’m glad they had us down here. On the first restart, I got a good start. On the second one, (Hanford) started sooner than I thought he would. I got on the gas a little and the tail swung out. On the third restart, I got a pretty good jump and held it there.”