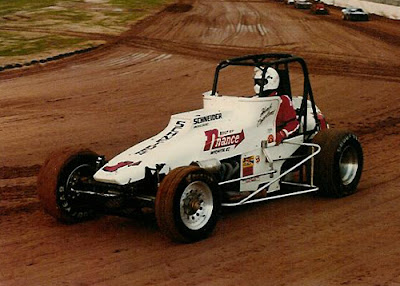 Hutchinson, Kan. (July 19, 1981) - For Wichita’s Herb Copeland, the highlights of an 18-year racing career has been few and far between.

Oh sure, he’s had his moments.

Like in 1969 when he captured the Hutchinson Nationals at the Fairgrounds and was also the Kansas State Champion.

But Copeland, a veteran at 41, figures he’s paid his dues. And now he’s ready to start collecting. The super-modified driver is reaping the harvest of an outstanding year in 1981 after having joined forces with Wichitan Carol Nance late last season.

“This is a lot like anything else - you have to pay your dues,” Copeland says. “Maybe mine have been paid. I’m just fortunate to get to drive this car. These kinds of cars are a privilege to drive.”

Copeland, a used car salesman, has rarely raced outside the Wichita and surrounding area - primarily due to the lack of a quality car. That has changed since he and Nance joined forces.

“This is the first time we’ve run the whole series,” says Copeland. “We just got together and decided to do this. This is our main objective and we decided on it during the winter.”

In two of his early races last fall, Copeland finished third and second at Oklahoma City and Muskogee, Okla. It was those finishes that prodded him and Nance into deciding to run the entire NCRA series.

“We felt we had the right car that could compete with the other top cars,” says Copeland. “All the credit (for the success) goes to guys who own and work with the car. As long as I don’t go to sleep, I think I have a chance to win every time out.”

Nance, who has been in auto racing since 1957, said he was pleased with the first-season success of the team.

“We got our feet wet last year and now are going the full series,” he says. “Herb and I do mainly all the work on the car. There’s a lot less hassle and we work well together. We know that the work that is done will be done right. With Herb, I just don't have any problems.”

That mutual trust is shared by Copeland. “I have a lot of confidence in Carol,” says Herb. “We always talk about what the car is doing and he fine-tunes the chassis. I have it in my mind what we need to do and we’re usually not wrong.”

During the ‘81 season Copeland has produced winning efforts at Dallas, Muskogee, Okla., Oklahoma City and Lawton, Okla. “If we win here (Hutchinson) and then place in the top five at the others, we should have a good chance of winning the championship,” Nance says. “But there’s always somebody there to take your place if you slip up.”

Nance says his car has become one of the best on the NCRA circuit. “We’ve sold about six of them and now we have to compete against our cars,” he says. “The car seems to be more stable and is more adaptable to all types of situations on the track. We think it’s better because of the engineering idea.”

Copeland regards himself as a driver who doesn't take many chances. At the same time, however, he believes he is aggressive when the time is right.

“I guess I've been tagged the gentleman driver around the circuit,” says Herb. “I don't feel like we take chances because our car will do what we ask it to do, within reason. The track here (in Hutchinson) is narrow and tough to pass on.”

Copeland, a native of Dodge City, got his start in auto racing in 1963. At the time he was racing motorcycles and spent much of his time on the road, traveling to far away places.

“A policeman in Dodge City thought if I was crazy enough to race cycles that I should get into racing cars,” Herb recalls of his start. “Racing the cars enabled me to stay closer to home since I had just gotten married. It just seemed a whole lot easier.”

After 18 years of racing, Copeland gives no hint of slowing down. “More than anything, it's a fear of quitting,” he says. “Everybody wants to win and you want to be good at what you do. I'm no different. If you can be good at it, stick with it. I've stuck with it longer than anything else in my life. When I quit enjoying it, then it's time to get out.”