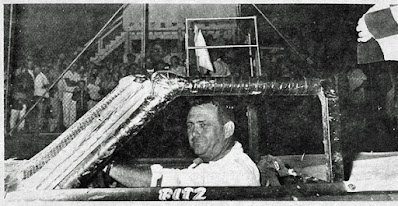 A crowd of close to 3,000 people watched the races in ideal weather conditions.

Fitzpatrick took home a first place trophy plus a cash prize of $515 for his fine performance but not before a bizarre chain of events in the feature race left the crowd wondering what exactly had happened.

The Rochester speed demon piloted his 1965 Chevelle to the front of the pact on the 34th lap after misfortune struck a pair of early leaders battling for the top spot since the start of the race.

The hard-luck award of the night went to Canada’s Tom Nesbitt and local favorite Phil Prusak. Nesbitt, who started the race in the pole position, led the race for the first 33 laps with Prusak on his tail before a unusual chain of events started.

Nesbitt’s 1966 Studebaker and Prusak’s 1966 Chevelle bumped on the main straightaway in front of the grandstand throwing Nesbitt into a spin. Prusak took over the lead but suddenly ran into mechanical problems on the following lap and ran off the track in the south turn. Fitzpatrick, running third at the time, spotted the opening and slipped past the fallen drivers to a lead he never relinquished. Prusak ended the race in the pits while Nesbitt finished fourth.

Last month’s Invitational winner, John Connolly of Delhi, Iowa, finished in the runner-up spot while Cumberland’s Russ Laursen took third in a 1969 Super Bee. Fitzpatrick started the race from the 10th spot while Connolly was side inside of the 6th row.

Two other local favorites, Harold Mueller and Red Steffen, failed to finish the race. The 40-lap feature attracted 18 cars but only nine finished the race.