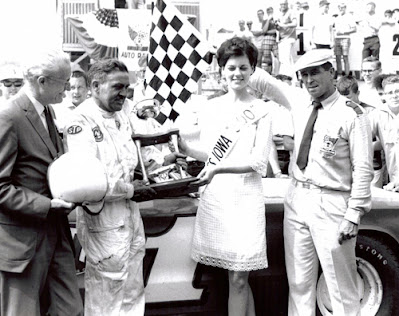 
Des Moines, Iowa (July 11, 1971) - Somebody turned to a newsman with 60 laps remaining in the Iowa 300 stock car race at the State Fairgrounds Sunday and said, “Ramo won’t win. One guy in his pit crew is wearing green socks.”

There is a racing superstition that green is bad luck.

Ramo Stott and Ernie Derr of Keokuk were embroiled in one of the hottest duels they ever had at the time - and they had many during the 1960s. They were 15 laps ahead of everyone else.

Stott, in a 1970 Roadrunner had been leading since lap 132 but Derr stayed close. At the 250-lap mark Derr’s 1970 Dodge Charger went sliding into the wall. By the time he was hauled into the pits and a tire - which had blown - was replaced, he was eight laps behind when he got back into action.

Stott slowed the pace and cruised merrily on his way. His pit crew danced with joy. There was no way he could lose.

But by golly, that fan’s prediction came true. Ramo finished second. Derr was the winner of the 150-mile event – Iowa’s longest stock car race - for the sixth consecutive time.

Here’s what happened before an estimated crowd of 10,100. On lap 178, the left front wheel on Stott’s car tilted inward. Ramo continued to run, slowly, and primarily on three wheels.

At the other end of the pits, Derr’s crew suddenly jumped to life and signaled their boss to start gunning it. Stott had to pit twice to replace tires, which lasted only a few laps. The suspense built.

Derr worked the deficit down to four laps; then down to three. On the 295th lap, the whole wheel assembly tore lose from the car and Ramo tried to stop, but his brakes were gone. He made one more circuit of the track, was black-flagged and finally stopped, although he again overshot his pit area.

“I guess the upper ball joint gave way,” Ramo said after the race as he reclined on the hood of the car signing autographs. “I guess that old bad luck is still with me.” But he added he didn’t believe the “green” superstition.

Ramo was one of the International Motor Contest Association's top drivers during the 1960s, but he never finished better than second in point standings. Derr, who has won 11 1MCA titles, was first most of those years.

Finally, the frustrated Stott switched to the Auto Racing Club of America in 1969. He came into Sunday’s race as ARCA’s defending champion and current point leader.

Asked if he thought he could have kept going and won had he not been black flagged, he said "No." Derr, who isn't one to give

Derr, who isn’t one to give long replies to questions, was asked if he believed he had a chance alter he fell eight laps behind.

He shook his head and said, “I’ll tell you one thing, it doesn't pay to give up. No, I didn’t believe I had a chance, but I just wanted to stay in there.”

Unofficially, the lead changed 14 times. Joe Wallace of Leavenworth, Kan., took the initial lead. Ron Hutcherson of Keokuk passed him on the fourth lap. Derr took over on the sixth circuit, and from then on either he or Ramo led.

But, as Derr said, “Leads don’t always mean much. It’s whose ahead at the finish that counts.”

Officials used the yellow flag 10 times slowing the race for 41 laps - because of wrecks and debris on the track. No one was hurt in a wreck.

However, Jim Washburn of Keokuk, a pitman for Stott, suffered minor injuries during one of Ramo’s late pit stops. He appeared to have been hit by the car as Stott tore out of the pits.