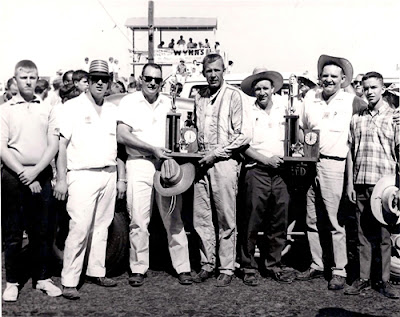 
Hutchinson, Kan. (July 30, 1967) - They take big chances and play for big prizes in the National Jalopy Championships — a sort of Russian roulette on four wheels.

Sunday before another packed crowd at the Kansas State Fairgrounds the big luck rolled with #11. The sleek tan speedster driven by Harold Leep, Wichita, roared through heavy traffic to catch the checkered flag after 50 grueling thrill-packed laps.

It was the second national title for Leep, who previously won in 1961. Second was Walt McWhorter, Wichita, and third was three-time champion Roy Bryant, also of Wichita.

Time for the 25-mile race, five of which were run under the caution flag, was 24 minutes and 16 seconds.

The luck of the drivers of those spinning little cars was generally good. Not one person was seriously injured.

But in this game it can’t be all good.

Frankie Lies, Wichita, who won championships in the first two national races, was literally flying as he took the third corner turn. He had taken over third place in the feature and appeared to be gaining on the leaders.

But the car driven by Larry Dewell, of Fowler, hit soft dirt at the turn and started to spin. Lies' car clipped a wheel and landed on the trunk of Dewell’s machine. Both were knocked out of the race. That was the crash that raised the yellow flag.

David Ross, the flying farmer from Jetmore, Kan., set the early pace in the feature. He was leader for 10 laps but on the 11th lap, while trying to lap slower cars he was forced into rough, soft track at the inside of the fourth turn, and skidded. Leep, riding the hard center, promptly took over first place and held it to the finish.

Ross’ bad luck wasn’t to end there. He was still in second place through 37 laps - and then blew a tire that forced him out.

Walt Pickard, Pueblo, Colo., and H. A. Ratzlaff, Dodge City, collided in a cloud of dust in the third turn, and Pickard's car slammed into the concrete fence, streaking it with tire marks five feet up and 12 feet long.

But Pickard kept on the track and was uninjured. The smash would have ripped a big hole in the old board fence. Still, the car was through for the day. Ratzlaff backed out, when traffic thinned, and made another turn of the track before heading for the infield.

For various reasons, starting with tire failure and running through engine failure, spinouts and crashes, 14 of the starters were forced out of action.