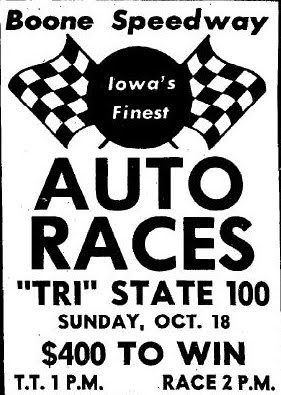 By Kyle Ealy
Boone, Iowa – It was an event that was short-lived; only running for four years (1969 to 1972). But for season-ending races, it was as unique as they came. Before parking their rides for a long winter's nap, it was one more opportunity for the cars and stars of the Midwest to shine and that’s exactly what they did.

It was billed as the Tri-State 100 and only the very best stock car drivers from Iowa, Illinois and Minnesota were invited each year. In order to be invited by Boone Speedway owner and promoter Vern Carmen, you had to finish in the top two in points at your respective track or had won a feature at some point during the season. No back markers or middle of the pack pilots in this event; only the best of the best were eligible.

That first year, Carmen put together an impressive purse, with the winner receiving $500 to win the 100-lap championship feature. As promised, the very best stock car drivers in the Midwest showed up including such drivers as Mel Morris of West Liberty, Iowa, the Columbus Junction champ, Don Hoffman of Des Moines, the Iowa State Speedway sportsman champion, Gene Schattschneider of Algona, the Kossuth County champion, Ed Sanger of Waterloo, the Marshalltown Speedway champion, Paul Fitzpatrick of Rochester, Minn., the Tri-Oval season titlists and Del Stokke, Ames, the season point champion at Boone. Another driver entered who was no stranger to Boone was recently-crowned Grand National winner George Barton of Ankeny.

Mike Keen of Marshalltown, Del McDowall of Des Moines, Arlo Dorenbush of Boone, Don “Shiney” Hilbert of Algona, Jerry LeCroy of Des Moines, Greg Davis of Boone, Perry Beckler of Tiffin, Arnie Braland of Boone, Stan Crooks of Wilton Junction and Billy “The Kid” Geil were among drivers who had won a feature at their respective track at some point in the 1969 season.

Another invitee was a driver not as familiar to area dirt track fans but was just as accomplished as those already listed. In fact, when Bob Jusola of Minneapolis, Minn., pulled into Boone, Iowa on October 4th, 1969, he was on a hot streak. Jusola competed the majority of the time on asphalt tracks in the Twin City area such as Elko Speedway and Raceway Park in Phil Stewart’s Tri-Circuit Association in Minnesota. 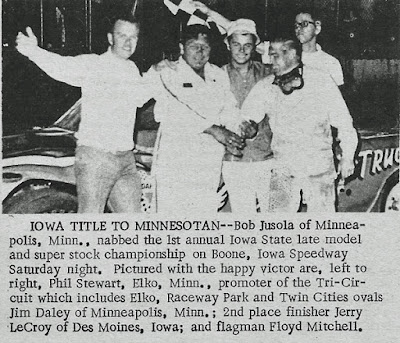 He had recently claimed the season point’s title at Raceway, located in Shakopee, Minn., thus earning himself an invitation from Carmen. Earlier in the month, Jusola had competed at the Minnesota State Fair, fairing well against the IMCA stock car drivers such as Ernie Derr. Just the week before the Boone race, Jusola competed at Rockford Speedway in the National Short Track Championships, where he shattered the track qualifying record with a time of 14.613 seconds on the high-banked quarter-mile and followed that up with a second place showing in the 200-lap marathon finishing behind winner Ramo Stott of Keokuk, Iowa.

When you’re hot, you’re hot and to Jusola, it didn’t seem to matter what type of racing surface he drove on. Sure enough, Jusola turned heads at Boone, claiming the pole position with a qualifying mark of 18.87 seconds on the 3/8-mile dirt oval.

The night ended on a happy note for Jusola...but for George Barton, the veteran driver from Des Moines, the story had a different ending.

Barton, winner of three Grand National titles at Boone and the season point champion in '69, was driving one of his better races, holding down the lead for some 70 plus laps. Just as the white flag waved, Barton's Chevy went sour; the quick change rear end breaking. Barton could do nothing as Jusola sailed by on the back stretch and then took the checkered flag before a stunned crowd.

The second annual event took place on a Sunday afternoon, October 11, 1970 but this time however, instead of an unknown outsider leaving town with the winner’s share, one of Boone Speedway’s very own walked off with the trophy and the Tri-State 100 title.

In fact, several well-known pilots who competed weekly at Boone, dominated the 100-lap affair, with three drivers, at one time or another, holding the lead during the race in which 24 cars started. Arlo Dorenbush was the first of the locals, grabbing the lead at the onset and holding it for 29 circuits. Arnie Braland, riding bumper-to-bumper with Dorenbush from the beginning of the race, slipped around Dorenbush to take the point on lap 30. Braland sped off and hid for the next 15 laps until a water hose broke, sending him and his Chevy to the sidelines.

This gave Greg Davis, who had won the season championship at Boone just two weeks before, the break he was looking for and he slipped into the driver’s seat and led the final 56 laps to victory and the $400 pay day. The win was not a given, however, as Pokey West of West Chester, Iowa, made a race of it and was on Davis’ bumper the last 10 laps but couldn't muster a pass and had to settle for runner-up honors. A blanket finish among the next three competitors saw Stan Stover of Reinbeck, Ed Sanger and Darreld Bunkofske of Algona round out the top five. Denny Hovinga of Laurens set fast time with a clocking of 17.68 seconds.

The 1971 edition of the Tri-State 100 was as star-studded as they came with newly crowned ARCA national champion Ramo Stott of Keokuk, Iowa, headlining an all-star field of late model drivers. Stott, wheeling a Roadrunner with a 426 Hemi engine topped the national circuit and won the series’ premier event, the Dayton 500 in Ohio, for the third straight year in a row.

Other notables invited included Dave Noble, Blooming Prairie, Minn., points champion at Tri-Oval in Fountain City, Wis., Denny Hovinga, Laurens, who won the point championship at the Boone oval as well as the crown at Kossuth Speedway in Algona and Mike Chapman of Whiting, the top point man at Alta. Del McDowall, Ames, was the point champion at Stuart Speedway and Arlo Dorenbush, Boone, was the Webster City track point champion. Phil Reece and Joe Merryfield, both from Des Moines, were the top two finishers at the State Fairgrounds track during the 1971 season, as well another Des Moines driver, Glenn Woodard, the sportsman point champion at the Boone Speedway. 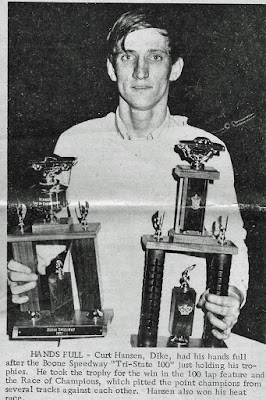 With all the heavy hitters in the field, 52 in all, it was the Marshalltown Speedway season champion, Curt Hansen of Dike, who swept all of the events he entered, including the 100-lapper. The youthful driver picked up not only the trophy for the feature win, but also took the "Race of Champions" - the event which pitted point champions from various tracks against each other and picked the win in the third heat.

Stott ran away from the field in the second heat, but couldn't stay with Hansen in the feature or the “Race of Champions”. Stott went to a different rear end gear ration for the feature after spinning his wheels through most of the early events, but still didn't come up with a combination that could keep up with Hansen. While Hansen ran away from the rest of the field and put his car in cruise control, Stott struggled and was set back by an early spin-out, but steadily gained ground to finish a fairly distant second.

Fast qualifier (17.35) Denny Hovinga finished third and Glenn Woodard, who was slated to start on the pole but was late in making the call and had to start at the rear of the field, battled through the 24-car field to grab fourth. Kenny Farrell of New Hampton rounded out the top five.

The fourth and final Tri-State 100, slate for Saturday evening, September 31st, had a stellar line-up of late model pilots including Joe Merryfield of Des Moines, the recent winner of the 1972 Grand Nationals at Boone.

Along with Merryfield was last year’s Tri-State 100 winner, Curt Hansen of Dike and also the point champion of three tracks that year; Marshalltown, Independence and Tunis Speedway in Waterloo.

Ron Weedon, Pleasant Valley, champion at Quad City Raceway in East Moline, Ill, was entered as well as Bob Kosiski of Omaha representing the Cornhusker state as the champion of his hometown track, Sunset Speedway.

Another top champion entered was Ed Sanger of Waterloo. He earned titles at both Cedar Rapids and Oskaloosa that year. Other entries included Stan Stover of Reinbeck and Gene Schattschneider of Algona, point champion at that track. Denny Hovinga of Laurens, point champion at Alta, Webster City and Boone was entered as well and the overwhelming favorite to win.

But fittingly, the winner was a driver whose name was most associated with Boone Speedway, George Barton of Ankeny, Iowa.

Denny Hovinga, as good as advertised, set fast time for the evening with a clocking of 17.15, a new track record. Starting on the pole, Hovinga took off and appeared to be the class of the field until lap 15 when a problem with his right front wheel made the Laurens speedster retire to the infield.

Barton, who started on the front row alongside Hovinga, took over from there and won the 100-lapper two car lengths ahead of Weedon at the checkers. Joe Merryfield, who held the third spot for the first 92 laps, experienced engine woes, allowing Karl Sanger and his brother Ed to slip by for third and fourth, respectively. Ron Tilley of Council Bluffs, Iowa settled for the fifth spot.

For four years, the Tri-State 100 at Boone Speedway signified the end of another Midwest racing season but more importantly, it pitted the best drivers, champion versus champion, from tracks all over the region. And only one driver got to brag that he was the very best among them all.