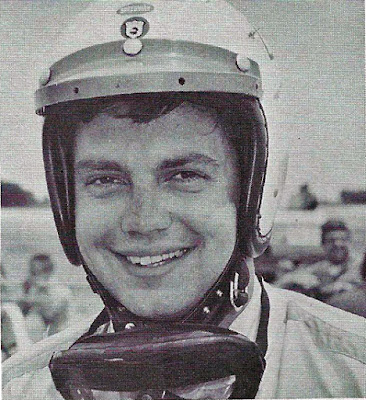 Lee Kunzman
New Bremen, Ohio (October 12, 1969) - Lee "Stub" Kunzman of Guttenberg, Iowa leaped several notches in the USAC midget point race on Sunday afternoon, when he captured the 30-lap feature on the half-mile paved oval.
Bob Wente of St. Louis, Mo., finished second while Gary Bettenhausen of Tinley Park, Ill., was third. Mel Kenyon of Lebanon, Ind., (formerly of Davenport, Iowa) notched a fourth place finish and sliced USAC midget points leader Bob Tattersall's spread to 27 points with only five appearances remaining.
The feature was a real thriller. Kunzman led for the first 10 laps but Gary Bettenhausen, driving his new Montag chassis Chevy II powered midget, came from the 7th spot to take the lead on the 11th circuit.
Bettenhausen moved into a 10-car length lead by the 19th lap but a blistered tire slowed him down on the 20th lap and Kunzman scooted by him for the lead and headed the stellar pack to the checkered flag. Tattersall, running third at the time, went out on the 24th lap with a broken timing gear and dropped to 18th by the end of the race.
Bobby Grim of Indianapolis, Ind., notched the fast time for the day, setting a new track record with a clocking of 18.35 seconds, which was .12 seconds better than the old mark set by Wente when he toured the half in 18.47 seconds. Kenyon picked up a pair of wins, taking top honors in the trophy dash and followed that with a victory in the first heat. Other heat wins went to Tattersall, Cy Fairchild and Grim. Dick Pole won the semi-main.
Results -
1. Lee Kunzman
2. Bob Wente
3. Gary Bettenhausen
4. Mel Kenyon
5. Sonny Ates
6. Mike McGreevy
7. Johnny Parsons Jr.
8. Dave Strickland
9. Bill Renshaw
10. Bobby Grim
11. Jigger Sirois
12. Merle Bettenhausen
13. Don Brown
14. Gary Ervin
15. Larry Rice
16. Dick Pole
17. Charles Master
18. Bob Tattersall