A Ferrari Battles the IMCA Stock Cars in 1958 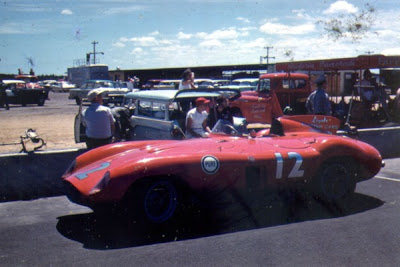 Loyal Katskee of Omaha gave the IMCA stock car drivers all they could handle piloting his 1957 Ferrari.

by Lee Ackerman
Omaha, Neb. - The old IMCA Stock cars series rule book stated that the cars eligible to compete should be “Cars must be of standard American stock makes, with hardtops, manufactured during (a certain year or after), of which 500 or more unites must have been manufactured and sold to the public, in order to qualify as a STOCK CAR (for IMCA Stock Car Races).
Except in races classified as “Free for Alls” or “Internationals” in which domestic and foreign sports car type cars can compete.” These Internationals were organized so that “foreign sports cars” could compete in certain events and it helped to insure a larger field of cars. Typically the sports cars that entered these events had performed poorly.

In 1958 Omaha sports car enthusiast Loyal Katskee entered his 4.4 liter 1957 Ferrari Monza in several IMCA Internationals. The first of these events was the Kansas International held on July 6, 1958 before a crowd of 6,500 fans at the Kansas Free Fairgrounds in Topeka. In that event, Katskee recorded a time trial lap of 30.25 seconds, third to fast qualifier Bob Burdick, also of Omaha in his dad Roy’s Ford, and Don White of Keokuk, Iowa also in a Ford.

At the end of the day, Bob Burdick came out on top in the grueling 200 lap feature in a time of 1 hour 51 minutes 3.06 seconds and picked up the $500 first prize. White would hang on for second. But the surprise of the afternoon was that Katskee backed up his fine third place qualifying effort with a third place finish in the Feature.

One week later IMCA held another International, this time the Iowa International 300 at the Iowa State Fairgrounds in Des Moines. In qualifying the day before the race, Katskee shocked the Stock Car fans by setting a new track record of 28.86 seconds in out qualifying Herb Shannon and Ernie Derr.

The next day 10,300 fans showed up for the Iowa International. It turned out to be accident packed as only 15 of the original 33 starters were able to finish the race which saw 14 yellow flags. The race was won by Don White (who would win the 1958 IMCA Stock Car champion, his third and then move on to become the winningest stock car driver in USAC history). Bob Burdick ran second, Frank Lies of Wichita was third, and in fourth was the Ferrari of Loyal Katskee, who made another fine showing.

The next IMCA International was held on the mile track at the Missouri State Fair in Sedalia, Missouri on August 24. Katskee once again set fast time breaking Bob Burdick’s IMCA record for the mile with a time of 45.58 seconds. The feature ran before a state fair crowd of 22,000 fans was for 100 miles and it looked like late in the race that White would hold off Katskee for the win, but with just 17 laps to go, White had to pit for a rubbing fender. Although, he was only in the pits for a few seconds, it was enough time for Katskee to go roaring by in his flame-red Ferrari. Despite a late charge by White, Katskee held on to win the race by a car length and score a major upset in IMCA stock car racing. His winning time was 1 hour 20 minutes 24.15 seconds.

Katskee next took on the IMCA stock cars regulars at the North Central Kansas Free Fair in Belleville, Kansas on August 30. Katskee sailed around the Belleville High Banks in 25.96 seconds and once again set fast time. In the 200 lap main event, Loyal pulled in to the pits after about 15 laps with a bad misfire. He thought he had broken the engine. He casually looked under the hood thinking his day was over and found that two spark plug wires had come off. He put them back on, fired the engine, and it purred like a kitten, so he quickly put his helmet back on and rejoined the race, three laps behind the field. At the end of the race, he had just passed the leader to get back on the lead lap, without the help of any yellow flags.

Katskee hoped to follow these efforts by competing in the International to be held over Labor Day weekend at the Nebraska State Fair in Lincoln, but Mother Nature had other ideas and the event was rained out.

Loyal Katskee and his Ferrari certainly weren’t a serious threat to defeat the IMCA regulars for the season championship but his efforts in the four Internationals that he competed in proved that his Ferrari could run just as well on the dirt as the road course of America.

In his career Loyal Katskee would compete on many of America’s most famous road courses from Lime Rock to Daytona to Riverside to Laguna Seca. In 1953 he competed at Offutt AFB south of Omaha in a SCCA extravaganza that General Curtis Lemay promoted. The race drew 55,000 fans. In 1954 he again entered the events at Offutt, winning the Cornhusker over 50 miles and then the SAC Trophy race again over 50 miles. In the 200 mile Omaha Centennial Grand Prix he finished third to Jack McAfee and Bill Spear.

In 1959 he would compete in the Speed Week Trophy Races in Nassau, Bahamas and in 1960 competed in what was undoubtedly one of the last major races in Cuba when he drove his Masserati at the Cuban GP de Libertad. But for several races during the 1958 IMCA stock car series, he made the veterans take notice of his flame red Ferrari.