Remembering when: The IMCA Stock Cars at Knoxville

by Lee Ackerman
Omaha, Neb. — The Marion County Fairgrounds in Knoxville, Iowa, is and has been for a long time the Sprint Car Capital of the World. But occasionally, the Sprint Cars have given way to those guys with fenders on. Such was the case back in the heyday of the old IMCA Stock Car Series. The series visited what was to become the legendary Knoxville Raceway six times in eight years and the races were fast and furious.

On August 7, 1959, the series made their initial visit to Knoxville and a fast track provided for the setting of two new IMCA records. Future NASCAR star Dick Hutcherson of Keokuk would set fast time of 27.49 seconds edging out Darrell Dake of Cedar Rapids. Heats went to Bob Kosiski of Omaha in his Thunderbird, Bruce Nystrom of Oshkosh, Wis., in a Chrysler and Bill Harrison of Topeka in a Pontiac. 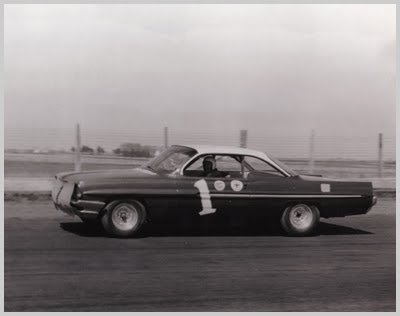 Ernie Derr of Keokuk, Iowa was a 12-time national champion in the IMCA stock car division.
Then they turned the wick up as Ernie Derr of Keokuk set a new IMCA record for 10 laps when he won the dash in 4 minutes 31.50 seconds. Lee Pickney of Des Moines won the consy and then it was feature time. Darrell Dake driving a ’57 Chevrolet convertible got the lead early on in the race and with constant pressure from Hutcherson and Derr went on to win the 50-lap main event, setting a new IMCA record of 22 minutes 59.78 seconds for 25 miles in the process. Following Dake, Hutcherson and Derr were, Newt Bartholomew, Sonny Morgan and Bob Kosiski.
The IMCA Stock Cars did not return to the Marion County Fairgrounds again until May 27, 1962, and this time it was for 200 laps. A crowd of 3,500 fans was on hand and they were treated to the some of the fine points of racing strategy.
Chub Liebe of Oelwein, Iowa, brought his Ford in for service, early in the race, long before necessary, and was out fast and soon picked up the leaders. Several drivers stayed out too long and ran out of gas while leading or near the front. Those included John Mickey, Ernie Derr and Johnny Beauchamp. Mickey’s problems were compounded when his crew mixed filler cans and put water in his fuel tank taking him out of the running.
Liebe reassumed the lead and was holding off a closely pursuing Beauchamp, when on the 198th lap, Beauchamp ran out of gas and Liebe sailed to the win. Liebe covered the 200 laps in 1 hour 33 minutes 49.63 seconds. Dick Hutcherson was second, Beauchamp third, Mert Williams fourth and Rookie Gil Haugen fifth.

On May 18, 1963, the series returned to Knoxville and Columbus Junction, Iowa’s John Mackey started things off with a bang as he drove his Gene Stewart tuned ’63 Pontiac to a new one lap IMCA record in qualifying with a lap of 25.60 seconds. Ernie Derr and Buzz McCann also broke the old record. Ramo Stott was a successful stock car pilot not only in the IMCA stock car division but the USAC and ARCA ranks as well in the 60's and 70's.
A capacity crowd of 10,000 watched as Ernie Derr took an early lead and would set a new record for 50 laps at 21 minutes 46.1 seconds. When Derr pitted on lap 55, Ramo Stott assumed the lead in his little ’63 Plymouth and was bound and determined to keep it. He did and along the way set a new track record for 200 laps of 1 hour 31 minutes 10.95 seconds. Fellow Keokuk resident Jim Washburn was second in a Ford, followed by Bob Reynolds of Edmond, Okla., Chub Liebe and Ralph Wilhelm of Milwaukee. 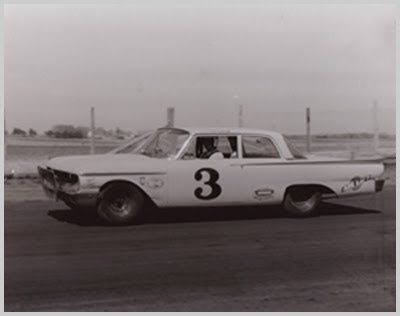 One of the famous "Keokuk Komets", Dick Hutcherson was a two-time IMCA stock car national champion in 1963 & 1964.
The May 2, 1964, race at Knoxville can be summed up in one name. Dick Hutcherson! Hutch started things off by driving his Ford to a new IMCA one-lap record of 25.44 seconds.
In the feature, Hutcherson was pressed all the way by fellow Keokuk driver Ramo Stott. The results were record setting as Hutcherson set new IMCA marks for 50, 75 and 100 miles turning the 200 laps in 1 hour 29 minutes 47.29 seconds. Stott was right on Hutcherson’s bumper the whole way and finished second. Gil Haugan of Sioux Falls was third, Bill Thomas of Lake Elmo, Minn., fourth and Roland Wilson of Bedford, Iowa, fifth.
Ernie Derr may not have always won on the first trip to a new race track but eventually he would figure it out. At Knoxville that happened on May 1, 1965. Qualifying second to rival and fellow Keokuk resident Ramo Stott, Derr went on to pick up his first IMCA win at Knoxville touring the 200 laps in 1 hour 31 minutes 39.5 seconds. Stott held on for second with Ron Hutcherson driving his Ford to a third place finish and giving Keokuk a one-two-three sweep. Bob Jusola of Mound, Minn., was fourth and Lenny Funk of Otis, Kan., fifth.
The IMCA Stock Cars would make their final visit to Knoxville on May 14, 1966 for the running of the “Hawkeye 200.” It was time for somebody to be a repeat winner, and it was no surprise that the driver would be from Keokuk. Ernie Derr set fast time at 25.74 with Ramo Stott second at 26.07. In the feature, however, it was Ramo Stott in his Plymouth taking top honors as he turned the 200 laps in 1 hour 31 minutes 48.54 seconds. Ernie Derr was second, Ed Negre of Monett, Mo.; the STP dash winner was third, with Lewis Taylor of Shawnee, Kan., and Bill Moore fifth.
While the IMCA Stock Cars would never return again to Knoxville and the Sprint Cars would make Knoxville a household name in racing, the Stock Cars provided the fans in Marion County with some exciting and fast paced racing.