1989 - Frank Gawlinski scored his 11th main event win of the year in the 50-lap late model feature of the season finale at Illiana Speedway in Shererville, Ind., on August 26. Gawlinski, gridded 12th, moved to fifth place in just a few laps. After a caution on lap seven, he needed only two laps to move to second and a lap later passed race leader Steve Seligman for the top spot, which he held to the finish. Seligman made one last run at Gawlinski on the white flag lap but fell short by about a car length. 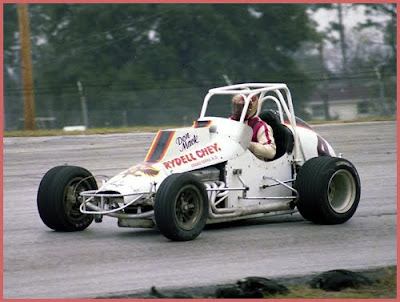 1978 - Curt Kelley of Union City, Mich. and Don Mack of East Grand Forks, N.D., won Midwest Sprint Association 40-lap features at the Minnesota State Fair Speedway on August 26th and 27th. On Saturday afternoon, Kelley overtook Dean Best following a restart on lap 30 and led the remaining laps to claim the $1,500 top prize. Mack, the 38-year-old potato farmer, was forced out of Saturday's feature with a flat tire but came back on Sunday to lead wire to wire. It was Mack's 30th sprint car victory of the year.

1972 - Pokey West of West Chester, Iowa, held off Waterloo, Iowa's Bill Zwanziger to claim his fourth super stock feature win of the season at the Wapello County Fairgrounds in Eldon, Iowa on August 26. Johnny Babb of Ottumwa, Iowa shot out to the lead at the drop of the green but lost it to a hard-charging West on lap three with Zwanziger slipping by a lap later. West and Zwanziger ran fender to fender for the remaining 16 laps with West just holding off Zwanziger at the checkers. Dale Snyder of Cedar Rapids, Ed Mellecker of Iowa City and Babb rounded out the top five.

1967 - Verlin Eaker of Cedar Rapids, Iowa made it two feature wins in a row at Speedbowl Park in Sterling, Ill., on August 27. Eaker, starting in the sixth row of a 19-car field, took the lead on lap 17 from the early leaders Bill Wirges and Bill McDonough. Wirges dropped out on the 16th lap after tagging the fence while McDonough went on to claim second. Don Bohlander of Glasford, Ill., John Schlemmer of Cedar Rapids and Lloyd Ewing of Kewanee, Ill., were the top five finishers.