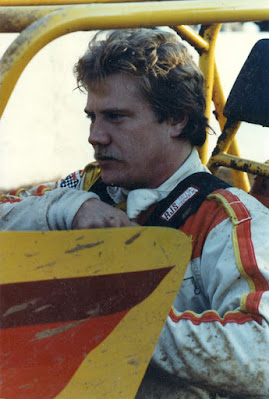 Steve Kinser was awarded the win after Doug Wolfgang was disqualified.
by Lee Ackerman
Omaha, Neb. - In 1982 Sunset Speedway opened the season with a double bang!! Two big specials would start off the season.

On Sunday, April 18, 1982 the season opened at Sunset Speedway northwest of Omaha with a bang, as the World of Outlaws made their first ever appearance at the 3/8-mile oval. A standing-room-only crowd was on hand on an unseasonably warm and very windy day to get a glimpse at the winged warriors.

In qualifications it was young Jeff Swindell of Memphis, Tennessee, who would set fast time with a lap of 16.998 seconds. Steve Kinser of Bloomington, Indiana would qualify second at 17.016 with Bob Hop of Mendota, Minnesota in third at 17.322. The heats would go to Bobby Layne of Kansas City, Bobby Davis, Jr. of Memphis, Tennessee, Ron Shuman of Mesa, Arizona and Rick Ferkel of Findlay, Ohio. Sonny Smyser of Lancaster, Missouri would win the B feature.

In the feature event it looked like Doug Wolfgang of Sioux Falls, South Dakota behind the wheel of the Doug Howells #4 would pick up his third win in two days. Wolfgang had won the previous afternoon in a midget show at the Iowa State Fairgrounds and then went to Knoxville, Iowa and won the World of Outlaw feature there. Wolfgang starting in 13th position and darted through traffic to take the lead on lap 20 of the 30 lap feature and took the checkered flag first. Problem was after conferring after the race, World of Outlaw officials disqualified Wolfgang for changing a tire on the track under yellow flag conditions. Early in the race Wolfgang had gotten caught up in an accident with Brad Doty and Danny Smith causing the yellow flag to fly. Wolfgang’s tire went flat after the incident and was changed on the track not in the pits. He was placed 18th in the finishing order and the win was awarded to apparent runner-up Steve Kinser.

Rick Ferkel would finish second, Randy Smith third, Bob Hop fourth and Shane Carson fifth. The windy, warm conditions created a rough track that made it impossible to keep the dust down and the fans went home wearing a far amount of it. Despite that, there were no great number of crashes as once the races were underway, the high winds eliminated a continuing dust problem. 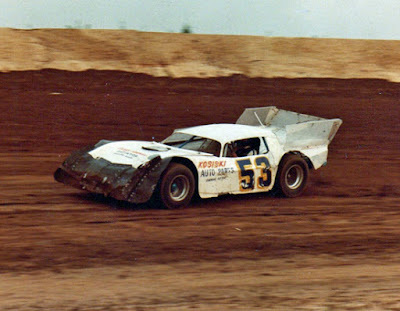 Joe Kosiski won the late model A-main at the Spring Invitational.
The following weekend Friday and Saturday night, Sunset presented the 10th annual Spring Invitational the traditional lid lifter at the facility. Previous winners of the prestigious race included Ed Sanger, Bob Kosiski, Bill Martin, Bob Saterdalen, Bob Shyrock, Joe Kosiski, Tom Bartholomew, Gary Crawford and Don Hoffman.
Forty-six late models and 46 sportsman representing 7 states showed up for the annual event.
Friday night saw heats in the late models go to Bill Martin, Al Druesdow, Steve Kosiski and Lakefield, Minnesota’s Dwain Hansen. The B consy went to Norfolk’s Don Weyrich and the A consy to Columbus’ Sam Jacobs. In sportsman action heats went to Jim Jenkins, Mel Sorensen, Craig Sullivan and Rick Germar with the B consy to Bill Mlnarik and the A consy to Ken Kovar. Saturday night would see continued qualification to get into the feature events. In the sportsman final heats were taken by Phil Gadbois of Albert Lea, Minnesota and John Wescott. Position races went to Mel Sorensen and Craig Sullivan with Mlnarik taking the last chance event. In the late models Rick Aukland made the journey from Morehead, Minnesota to take heat one with a former winner of the event, Gary Crawford of Independence, Iowa taking heat two. Bill Martin and Steve Kosiski took the position races and Roger Thompson of Junction City, Kansas the last chance event.
In the 25-lap sportsman feature it was all Jim Jenkins. Despite several red flags and cautions, no one could keep up with Jenkins who won the race and pocketed $800. Pat Wancewicz moved up to third where he set for sometime before he was able to get around Mel Sorensen on the last lap and lay claim to second. Sorensen finished third with Kovar fourth and Kevin Williams fifth.
In the 50-lap late model feature, Bill Martin jumped to the front with Steve Kosiski doing battle with Martin until Kosiski’s race ended abruptly when he sailed over the backstretch and down into the trees. Kosiski was uninjured but done for the night. Pushing Steve at the time of his departure were brother Joe and Dave Chase. Chase would later drop out of the race with suspension problems.
With just four laps to go, Joe Kosiski was able to grab the lead from Martin and hold on for the win and a $3,000 payday. Martin would cross the line second with a flat tire. Vic Bentlage of Jefferson City, Missouri would finish third, Al Druesedow fourth and Bob Hill of Randall, Iowa fifth. Sunset would then be idle until the regular season opener on May 16. Al Druesdow would be crowned the regular season late model champion and Bill Leighton the sportsman champion.