by Lee Ackerman
Omaha, Neb. - Nebraska lost one of its racing legends with the passing of Bob Burdick. Burdick was the only Nebraskan to ever win a race in NASCAR’s premier division when on March 26, 1961, he drove his dad Roy’s Pontiac to victory lane at Atlanta Motor Speedway. Despite being unfunded, racing on used tires, with a borrowed rear end and a rag-tag rookie pit crew, Burdick took the lead of the Atlanta 500 on lap 292 and pulled off one of the biggest upsets in NASCAR Cup history.
Robert “Bob” Burdick was born in Omaha, Neb., on October 26, 1936. Racing was a natural for Bob as his dad Roy owned stock cars starting in 1949 with Bob’s uncle Bud doing the driving. Bob however, started his racing career in motorcycles. Among his championships on two wheels was the Nebraska State Motorcycle Scramble in which he rode his underpowered BSA Gold Star Clubman to victory despite an early race accident.
After three years racing on two wheels, Bob and his dad built a 1955 Ford to compete in IMCA. He made his IMCA and four-wheel debut at Hutchinson, Kan. and came away with a very impressive fourth place finish. This led Bob and his dad to start campaigning full time on the IMCA circuit and in 1956 they won four races on the circuit and finished fourth in the championship. 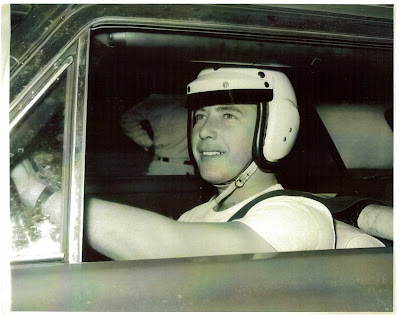 Bob Burdick readies for action prior to an IMCA stock car race in 1956. - Photo courtesy of Lee Ackerman
Bob continued to improve as a driver and started to understand that a good handling car was the key to success. Combining this knowledge and experience with his dad’s well-prepared cars featuring stout Burdick engines and the 1957 IMCA championship would come down to Ford versus Chevrolet.

In 1957 Burdick in his Ford and Harlan, Iowa’s Johnny Beauchamp in his Chevrolet waged a war for the IMCA championship with the point's lead switching back and forth. Late in the season, Burdick experienced a rash of bad luck and finished second in the championship chase with 22 wins. Among his wins that year were the prestigious Iowa International 300 at the Iowa State Fairgrounds, two wins during the Minnesota State Fair, a win at the Iowa State Fair, and a win at his home state fair, the Nebraska State Fair in Lincoln. On July 26 at the Red River Fairgrounds in Fargo, North Dakota, Bob barely escaped serious injuries when he hit the front stretch wall and had two planks come through his windshield and barely miss his head. He escaped with a broken bone in his hand and a bruised shoulder. His car received serious damage.

In 1958 Bob scored 13 wins on the circuit and finished 3rd in the points. During his short three year IMCA career, Bob Burdick scored 40 victories and had 2nd, 3rd and 4th place finishes in the point championship. He also set many track records during that time. During this same time, Burdick raced at the Pioneer Speedway in Des Moines for promoter Marion Robinson, who would later become famous for starting the Knoxville Nationals. Because IMCA frowned upon their drivers running the local bullrings, Burdick competed under the alias Don Quinn and drove one of his old IMCA cars to many victories at Pioneer Speedway.

In 1959, Bob was drafted into the Army but used his leave to continue to race. Having worked closely with Holman & Moody during his IMCA days, the Burdicks’ continued to use Fords in their next endeavor, NASCAR. In the 1959 Southern 500 at Darlington, Bob still a rookie in NASCAR’s top division, sat on the provisional pole, started fifth, and finished second in the race. He was the Darlington Rookie of the Year and was inducted into the Pure Oil Record Club. In six starts in his NASCAR rookie season, Bob scored two poles, at Trenton, New Jersey and Columbia, S.C., and had four top 10's. 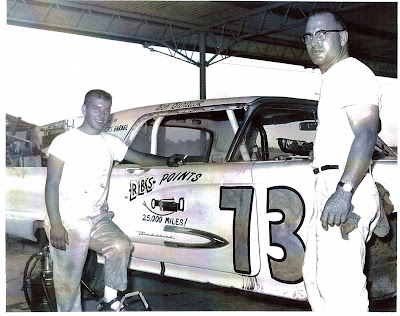 Bob Burdick poses with his father Roy prior to a NASCAR event in 1961. Burdick is still the only Nebraskan to win a race in NASCAR's premier series. - Photo courtesy of Lee Ackerman
Driving Fords in 1959 and 1960 and a Pontiac in 1961, Bob Burdick made the most of his limited NASCAR career capping it off with the above-mentioned win at Atlanta. In 15 races, he scored one win (1961 in Atlanta), one second and one fourth, nine top ten finishes and two poles. He ran up front in most of his NASCAR races in cars that were engineered and built in Omaha, Nebraska. In fact, some of the cars that the Burdick’s campaigned with in NASCAR carried the following logo, “Built by Farmers in Nebraska.”

Distance and money cut the Burdick’s NASCAR career short. In the early 1960’s Bob ran super modifieds with much success in Nebraska, Iowa and Kansas driving for the likes of Ernie Motz of Omaha and Kettleson’s Automotive in Lincoln.

On Labor Day 1963 at the newly opened Midwest Speedway in Lincoln, Neb., Burdick and fellow Nebraska Auto Racing Hall of Fame inductee Lloyd Beckman put on one of the best shows ever waged at Midwest. In the 50-lap feature, the two battled each other lap after lap, putting the rest of the field a lap down before a lapped car took Burdick (the leader at the time) out on the white flag lap and Beckman was awarded the win.

Bob would be the first to say that you can’t do it all by yourself over the years he had some great pit crew members. Bill “Bad Body” Morris, Ed Sacks, John Czaja, John Narduzzol, Roy Ehlers, Jim MacElroy, Ralph Koch, Rich Peers, and the real Don Quinn were there to help Bob at various times during his IMCA or NASCAR days. Later Ray Killion helped out during the super modified days. And of course, it didn’t hurt to have an automotive genius like Roy Burdick as a father.

Bob, his dad Roy and his uncle Bud have all been inducted into the Nebraska Auto Racing Hall of Fame. It didn’t matter whether it had two wheels or four, Bob Burdick could drive it.