1968 - USAC drivers take to the hardwood 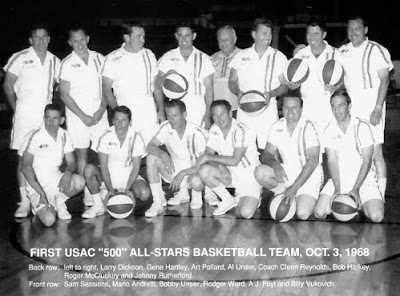 Indianpolis, Ind. - It was a sight that will remain in the memories of all who were present, for many years to come.
The USAC 500 All-Stars basketball team challenged the PERT team (Press, Entertainment, Radio and TV) to an exhibition game at the Indianapolis Coliseum on Thursday night October 3, 1968 with the proceeds going to the USAC Benevolent Fund, to be used toward the rehabilitation of injured driver Bob Hurt, who watched from the sidelines. Almost 8,000 people were on hand for the game, which raised over $13,000.00 from ticket sales and other contributions.
The game consisted of four 5 minute quarters which were highlighted by some of the most unconventional basketball ever witnessed.
Mario Andretti climbed on Roger McCluskey's shoulders for a better chance at reaching the basket; Referees Dave Overpeck and Pat Vidan gave the All-Stars a ten yard penalty for kicking a field goal and there was some confusion when a ball with no air in it was introduced into the game.
There were a number of wrestling matches during the evening. At one point A.J. Foyt was attacked by three members of the press team and almost disappeared from view. There was a short struggle before A.J. emerged with the ball still tucked under his arm. Indianapolis Motor Speedway announcer Sid Collins pointed out to the crowd that choking of opponents would not be allowed beyond two minutes.
The game was about to end with the All-Stars leading 7-4, when every player on the sidelines came onto the floor bringing a few "spare" balls with them to help boost the score, and the proceedings ended with a custard pie fight involving the entire company.
Indy winner Bobby Unser suffered some of his recent racing luck and was out in "warm ups" with a sprained ankle.