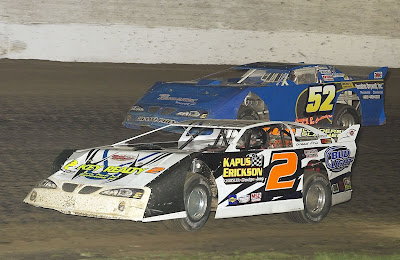 Brady Smith (2) and Steve Kosiski (52K) duel during the WDRL PolyDome Super Series finale at Lakeside Speedway on Saturday evening, October 9, 2004. Kosiski would win the 50-lap feature while Smith's fourth place finish would net him the series title.
2004 - Steve Kosiski of Papillion, Neb., roared past Springfield's Terry Phillips four laps from the checkers to win the 50-lap WDRL series finale at Lakeside Speedway in Kansas City, Kan., on Saturday night, October 9. Brady Smith's fourth place finish clinched the 2004 PolyDome Super Series title for the 26-year-old Solon Springs, Wis., pilot.
1999 - For the second year in a row, Eddie Hoffman of Westchester, Ill., won the Oktoberfest 200 edging out local favorite Steve Carlson of West Allis, Wis., by .436 seconds at the checkers on Sunday afternoon, October 10 at La Crosse Fairgrounds Speedway. Hoffman passed Carlson on lap 128 and fought off several challenges throughout the contest. Madison's Brian Hoppe's third place finish secured the 1999 RE/MAX Challenge Series title and Jimmy Mars and Johnny Sauter rounded out the top five.
1994 - Victory was sweet the third time around for Joe Shear of Clinton, Wis., as he won the Oktoberfest ARTGO 100 feature at La Crosse Fairgrounds Speedway on Sunday, October 9. Shear, who had also won in 1972 and 1989, started 21st but gradually made his way to the front passing Neil Knoblock on lap 47 for the lead and then holding off an aggressive Matt Kenseth for the remainder of the race.