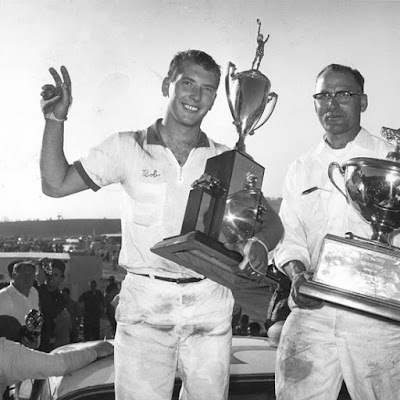 Bob Burdick acknowledges the crowd after winning the Atlanta 500. His father Roy joins him in victory lane.

Burdick, who started seventh in a field of 46, was in contention the entire way, but he never seemed to try to take the lead.

Then on lap 292, Marvin Panch of Daytona Beach, Fla., was forced into the pits with a broken axle and Burdick moved to the front of the pack and stayed there until the he received the checkered.

His average time for the 344-lap event was 120.044 miles per hour, about three miles an hour faster than the average speed in last year’s race.

Nelson Stacy of Cincinnati, Ohio, guided his 1961 Ford to third place, a whisker ahead of Rex White of Spartanburg, S.C., in a 1961 Chevrolet.

The victory was worth approximately $16,000 to Burdick.

The grueling NASCAR-sanctioned race took a terrific toll on machines with only 16 cars running at the end of the race. There were several accidents, but no one hurt seriously. Joe Lee Johnson of Chattanooga, Tenn., received treatment for a knee injury when his car was involved in a pileup on lap 126.

An estimated 43,000 race fans jammed into the two-year-old Atlanta International Raceway for the race, third in the history of the mile and a half asphalt track.

The weather was perfect for racing, a pleasant contrast to the cold temperatures and biting winds which had punished spectators in pre-race events.

An indication of what would follow came early as Fireball Roberts of Daytona Beach, Fla., was forced out of the race on lap 30 with a blown transmission after waging a terrific battle with Fred Lorenzen of Elmhurst, Ill.

Lorenzen had taken the lead from Roberts on lap 13, pouring it on in his 1961 Ford at a sizzling pace of 133 miles per hour. He was building up a sizeable lead when his right rear tire blew out and is car skidded into the guardrail, forcing him out of the race on lap 101.

Panch moved into the lead, followed by Banjo Matthews of Asheville, N.C., in a 1961 Ford.

Roberts, eager to get back in the race, got his chance when Joe Weatherly of Norfolk, Va., tired on lap 107. Roberts relieved Weatherly and immediately started pushing Weatherly’s Pontiac towards the front.

Curtis Turner of Roanoke, Va., took over the top spot in his 1961 Ford when Panch pulled in for a pit stop on lap 154. Pushing turner hard were Stacy, Jack Smith of Spartanburg, S.C., Roberts and Matthews.

The mechanical bugaboo struck Roberts again when his right rear tire blew on lap 177. He held the car well in control but had to go around the track on the rim and his car was knocked out of action when his wheel bolts broke in the pits.

Panch regained the lead on lap 187 when Turner made a stop for fuel. Turner got back in the race, but his car was over heating and he was soon forced out.

Matthews, who had nursed his car into second place, took the lead and held it for 32 laps when his car went out with mechanical issues.

Once again, Panch’s car took the lead but with Roberts behind the wheel. At the 293rd lap, Roberts pulled into the pits for a routine fueling stop and Panch slipped in behind the wheel again. Panch was still in the lead when he left the pits but six laps later his axle broke and he had to pull in for repairs.