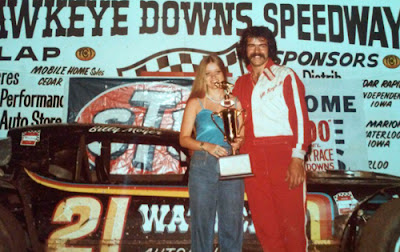 Billy Moyer Jr. accepts his hardware after winning the trophy dash at the 1981 Miller 100 at Hawkeye Downs Speedway. Moyer would go on to win the prestigious event in 1987 and '88.

Omaha, Neb. - Some of us have grown old, watching him race. And win and win and win some more. His resume simply goes off the chart. Over 700 feature wins. He has won most of the longer standing major dirt late model races multiple times. He has won races from one end of the country to other. We have nicknamed him “Mr. Smooth” and that he certainly is. His name has become synonymous with dirt late model racing.

As he reached the half-century mark of his life, we started to think that maybe, just maybe he was slowing down just a touch. Being a man of few words, and huge accomplishments he responded the way he has always responded. In 2008 he helped develop a new chassis and posted 20 wins and was named the National Dirt Late Model Driver of the Year.

Since the early to mid-80’s his career is well documented and if you open a racing paper from the period on, his name is always there in the headlines, but what of his early career. We know he grew up in Iowa was the son of a pretty fair racer himself in Bill Moyer and that he was a winner right out of the box. Then in the early 80’s he started driving Larry Shaw race cars and moved to Batesville where he eventually married Joyce, Larry’s sister, but what of his earlier years. Hopefully, the following narrative and pictures will help highlight the early years of his career.

Billy Moyer began his racing career riding motorcycles in motocross. He had a distinguished seven-year career scoring 160 wins. He was the Iowa Motocross Association (IMX) open class champion in three years in a row.

In 1977 while he did some motorcycle racing, with the encouragement of his dad, it was time to go stock car racing. That year he raced both sportsman and late models and registered 20 feature wins.

1978 was Billy’s first full year of late model racing. It was also the year he settled on a new number, the number we have all grown to recognize him by – number 21. That year stepping up against tougher competition he scored 6 wins. 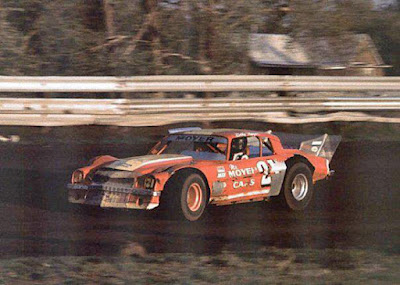 In 1980 while continuing to race in Iowa, Billy started to travel throughout the Midwest racing in the National Outlaw Stock Car Association (winged late models), the Missouri Nationals at Jefferson City, and the Nebraska Late Model Nationals at Mid-Continent. He ran second against stiff competition in the Cornhusker Hawkeye Challenge at Harlan, Iowa. He would add 12 more wins to his resume.

1981 saw Billy win races in Iowa, Missouri, Kansas, Minnesota, Illinois, and Nebraska. He won the Spring Fever at Hawkeye Downs and ran with the National Speedways Contest Association. He registered 16 wins that year.

1982 saw a new Shaw Chassis and an expanded racing program. The results proved to be highly successful. Taking his game to a new level he won 24 features. He won the NCRA opener at Thunderbird Speedway in Oklahoma, the Nebraska Late Model Nationals at Mid-Continent Speedway, the Pizza Hut Classic at Alta, Iowa, and the Pepsi Challenge at Lakeside Speedway in Kansas. 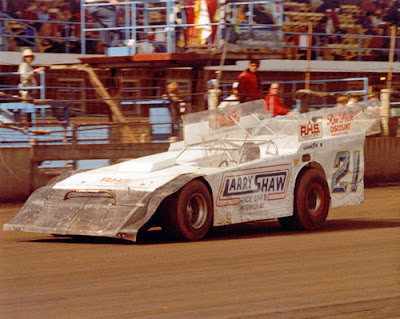 Billy Moyer Jr., behind the wheel of Larry Shaw's wedge late model at the Springfield Mile in 1983.

And the rest as they say is history.

A very special thanks to Joyce Moyer and Michelle Petroff without who’s help this story would not have been possible.