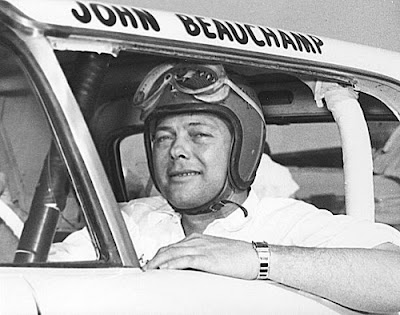 
Atlanta, Ga. (March 22, 1959) – Johnnie Beauchamp, who recently lost the Daytona 500 by a few inches and a reversal of the official’s decision, was somewhat luckier Sunday, as he won the 100-mile NASCAR Grand National auto race at Lakewood Speedway.

Beauchamp, a native of Harlan, Iowa, wheeled his 1959 Ford Thunderbird around the one-mile track in 1 hour, 19 minutes and 49 seconds for an average speed of 75 miles per hour.

Had the race lasted another couple of laps, it is quite possible luck would have frowned upon him again. His car’s rear end began to smoke as he went into the last lap.

Veteran Buck Baker of Spartansburg, S.C., in a 1959 Chevrolet, finished in second place, a mile or so back.

Although there were no serious mishaps, mechanical failure took a heavy toll of the starters. Among them was Lee Patty, the North Carolinian awarded late judgment over Beauchamp at Daytona. He was sitting on the back stretch with a broken axle when the race was won by Beauchamp.