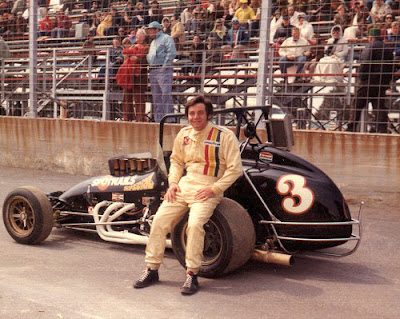 Kunzman had both the handling ability and the power of the Jack Steck wrenched car to zoom to the victory over the half-mile paved banks, however Greg Weld gave hm quite the struggle, especially in the last few laps.

After a lap 34 yellow dissipated a 10-second lead for Kunzman, Weld applied plenty of pressure for the balance of the race, making at least three attempts to take the top spot.

Kunzman would fend off all challenges by the Kansas City, Mo., pilot and win by four car lengths.

In a post-race interview with Weld, he said he could get around Kunzman but the back-end of his rear-engine beauty kept breaking loose causing him to lift from thee throttle before he wanted to.

The 40-lap A-main started with polesitter Benny Rapp leading thee first go-round before Jerry Poland passed him going down the backstretch. Don Nordhorn then took the lead on lap 6 with a same-place pass.

Finally, Kunzman, up from his sixth place starting position (having set fast time), roared around Nordhorn coming off the fourth turn and led the rest of the way.

Thee attrition rate was high with only nine of the 20 starters finishing. Among those out were early leader Rapp with handling problems and Larry Dickson in the rear-engine Gehlhausen with radiator issues.

Yellow flags unfurled three times during the feature but there were no accidents. In fact, the whole program was safely run, and speeds were exceptionally fast. No records were broken due as the cold weather affected the adhesion of the tires.

The cold weather, with snow the day before, kept the crowd down, but 3,000 diehard fans still showed up.

Finishing third behind Kunzman and Weld were Karl Busson, who started 14th. He was followed by Bill Puterbaugh and Nordhorn.

Defending USAC sprint car champion Sam Sessions was without his regular ride as the Amerling Special was stuck somewhere up north in a snowbank.