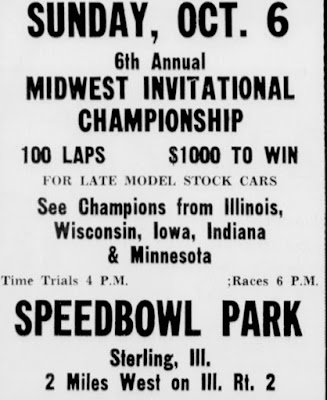 by Kyle Ealy
Sterling, Ill. – During Speedbowl Park’s heydays, it was considered one of the most prestigious season-ending races not only in Illinois, but the tri-state area.

The Midwest Invitational attracted the area’s top late model drivers from Iowa, Illinois and Wisconsin. Track owner Lyle Frazier offered what was then a huge purse for that time; $3,000 – with $1,000 going to the winner.

Seventy-two entries and a record crowd of more than 5,000 fans set the stage for the inaugural race held on October 6, 1963. When the dust settled, it was IMCA star Dick Hutcherson of Keokuk, Iowa, taking the win and the $1,000 check.

Dean Montgomery of Milan, Ill., led the most laps in the 100-lap affair and it appeared that he was well on his way to winning but a seven-car pileup on lap 98 would collect Montgomery, denying him victory. Hutcherson, trailing close behind, was able to avoid the melee and cruised the final two circuits to secure the win.

Don Bohlander of Glasford, Ill., who tied with Del Williams of Aledo, Ill., in the season point standings, won the toss of the coin for the pole position and led the field of 30 cars. He would spin while leading the race on lap 6 but would display great driving skill and finish behind Hutcherson to collect the $500 second-place money.

Shorty Bennett of Davenport, Iowa, making his first appearance of the season grabbed third followed by Red Droste of Waterloo, Iowa, in fourth and Jim Strube of Peoria, Ill., rounding out the top five.

With the high number of cars came a lot of accidents and the program didn’t end until 2:30 am Monday morning. That didn’t seem to bother the fans, who stayed until the bitter end. 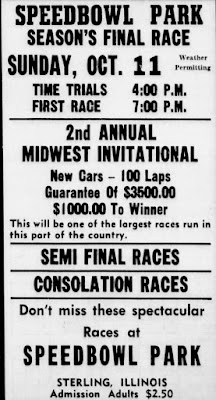 Mert Williams of Rochester, Minn., won the pole position by setting fast time, touring the 1/3-mile dirt oval in 19.05 seconds, a new track record. However, it was Williams jumping into the lead after receiving “Jumpin” Jack Heiman’s green flag and he was never headed as he drove a beautiful race for the crowning glory.

Williams would settle for second but was pressed the whole way by Waterloo, Iowa’s Bill Zwanziger, who took third. Jerry Roedell of Peoria, Ill., a popular driver at Sterling, stayed up front with the leaders and finished fourth. Shorty Bennett would grab another top five finish in the event while Benny Hofer of Rock Island, Ill., hauled down sixth-place money.

Don Bohlander, the Speedbowl Park point champion for 1964, was crowding the leaders until lap 60 when he struck a pile-up in the east curve and he lost his steering column.

USAC star Gary Bettenhausen of Tinley Park, Ill., driving a 1964 Dodge powerhouse, arrived late but was still allowed to time trial. Displaying too much speed and not geared properly, the son of the late Tony Bettenhausen turned a terrific first lap, which would have qualified him for the 30-car feature, but on the second try ran off the straightaway to the west, shearing off an oil filter and unable to continue.

The program ran a lot smoother than the year before and the checkered flag waved a little after 10 pm. 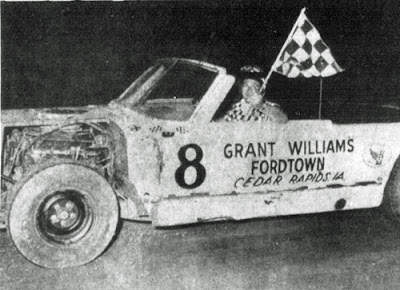 Darrel Dake of Cedar Rapids, Iowa, who had just won the Speedbowl Park season championship the week before, would win the third annual Midwest Invitational on October 11, 1965.

Dake would start out by breaking the track record in afternoon time trials, with a new record time of 18.49 seconds.

Starting on the pole position for the 100-lap main event, Dake would take the lead immediately only to be challenged by fellow front-row starter, Verlin Eaker of Austin, Minn. At one point, early in the race, Eaker would pass Dake, the local favorite from Iowa.

Then, as Dake was working at recapturing the lead on lap 30, Eaker went a little too high in the first turn and went over the edge, his car suffering severe damage to the under-carriage. He would be scratched for the rest of the night.

With Eaker out of the picture, Dake would cruise to the easy $1,000 victory.

Benny Hofer would apply pressure in the late going but would have nothing for Dake and settle for runner-up honors. Don Bohlander, one of the pre-race favorites, started 10th and came home a strong third. Fred Strube of Peoria, Ill., the regular season point’s champion at Speedbowl Park, finished fourth and Jerry Reinhart of East Moline, Ill., rounded out the top five. 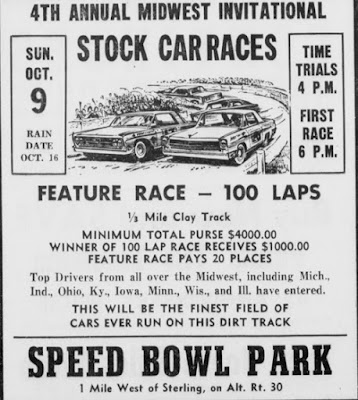 
Dake would continue his dominance of Speedbowl Park during the 1966 season and when the fourth annual Midwest Invitational took place on October 9, he would successfully defend his crown.

A crowd of well over 5,000 watched Dake, the Speedbowl Park season and point champion, set the fastest time (18.87 seconds) of 63 entries, earning himself the pole position for the feature.

It would be the other front-row starter, Johnny Beauchamp of Atlantic, Iowa, jumping into the lead. However, that lead would be short-lived when the former IMCA national champion got loose in turn three, jumping the cushion and smashing into a retaining fence. He was out for the remainder of the race.

Beauchamp’s mishap allowed Dake to inherit the lead but that would be short-lived as Jim Gerber would slip by Dake on lap 4 to take the lead. However, a lap 7 caution, combined with a two-cent part, would be Gerber’s undoing.

As the field of machines accelerated for the restart, Gerber was unable to shift, having lost the cotter key from the shifting linkage. Gerber would be forced to go to the rear of the field for the restart, squashing any chance of victory and the $1,000 pay day.

Dake would again take the lead and this time, keep it, widening his margin and motoring to a dominating win.

The battle for second place kept the fans eyes glued to the track as Don Bohlander and John Connolly of Delhi, Iowa, battled back and forth for most of the race, with Connolly finally getting by the Illinois speedster on lap 77 and taking the $500 check.

Bohlander would also get passed by Benny Hofer nine laps later for third place and end the evening in fourth. ’64 winner Dean Montgomery would finish fifth and Jim Gerber, after re-starting at the rear of the field, was the hard-charger, finishing sixth. 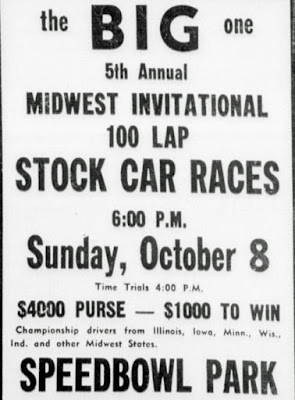 Verlin Eaker, the regular season point champion for 1967, would stop Dake’s stranglehold on Speedbowl Park’s marquee event when he won the fifth annual Midwest Invitational on October 8, before another capacity crowd.

But Dake didn’t just hand the title over to Eaker. The two-time champion would set a new track record, touring the third-mile dirt oval in 17.98 seconds. Eaker was second fastest with a time of 18.02 seconds. The other 58 qualifiers couldn’t break the 19-second barrier.

Dake would sit on the pole position with Eaker alongside when Buzz Reed’s green flag waved on the 30-car field. Dake would look like the man to beat at the start, blazing to a half-lap lead and threading his way through the back of the field by lap 5. Dake’s car could not keep up with the pace and on lap 22, his car suddenly slowed and pulled to the infield with overheating issues. Dake would not have the opportunity to defend hiss crown.

With Dake out, Eaker had no other competition and would lead the final 78 circuits to seal the win and collect the $1,000 check. Eaker had over a half-lap lead on the rest of the field in his hemi-powered Plymouth.

At the finish, 18 of the original 30 cars were still on the track and nine cars finished the entire 100 laps.

Three 25-lap semi features were run before the main event. Dean Montgomery, Benny Hofer and Herb Shannon of Peoria, Ill., were victorious in those events. 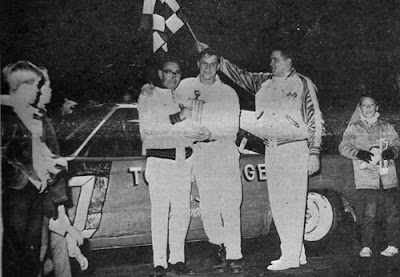 Verlin Eaker is presented his trophy after winning the sixth annual Midwest Invitational.


Eaker would continue his success in the sixth and final Midwest Invitational, held on October 6, 1968. Eaker would set fast time in qualifying, start on the pole for the 100-lap contest and lead 99 laps to collect the winner’s share of the purse.

What was even more amazing about Eaker’s win was he ran the last 25 laps of the feature with a flat tire. The safety inner boot prevented his tire from going completely flat and even permitted him to pull away from the rest of the field in the closing laps.

Herb Shannon finished a distant second while Speedbowl Park season and point champion Don Bohlander took third. Jim Gerber was the last of the four drivers to complete all 100 laps.

Lem Blankenship, a up and coming star from racing capital of Keokuk, Iowa, drove the most impressive race of all, starting 28th and finishing an impressive fifth.

A total of 66 cars qualified for 30 spots in the season finale and 16 drivers fell under the 19 second mark.

Sterling’s Speedbowl Park would have a similar season-ending event on October 5, 1969. The first annual Corn Belt 1000, promoted by Rockford Speedway’s Hugh Deery, paid $1,000 to the winner. John Connolly would come out on top, after a see-saw battle with Jim Gerber for most of the race. Darrel Dake would take third followed by Red Droste and Bill McDonough.

On July 13, 1970, Speedbowl Park owner Lyle Frazier would shut the track down, citing poor attendance and lack of cars. He would sell the track by the end of the year and retire to Florida.