From the Kokomo Morning Tribune 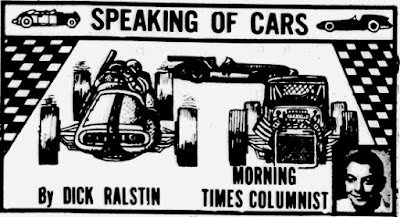 I passed up the “Yankee 300” last Sunday afternoon in favor of going to a “sprint car” race at New Bremen, Ohio.

From all accounts the “fender benders” put on quite a show at the Indianapolis Raceway Park 2.5-mile road course. But there is one thing that most people connected with automobile racing agree on; to see racing at its best, watch the “sprint cars.”

The name describes them pretty well. They are built to go short distances, usually on a half-mile dirt or asphalt track, at the speed of a cannon ball.

Sprint cars have the power of a 10-ton truck, the strength of a Sherman tank, and the handling qualities of a sports car.

When you turn 14 of them loose on the same race track at the same time you have pure mayhem.

Engines in these bombs are the same size as the ones that power the Indianapolis race cars. Unless they use a “stock block” engine, these are allowed 305 cubic inches displacement instead of the standard 255.

Don Branson was the leader in the USAC sprint division last year. Don says there is no such thing as strategy in a sprint race. He says, “You simply have to go all out for the entire race, and don’t make any mistakes.”

This pretty well describes it. A driver can be leading a sprint race and get to high in one turn and a half dozen cars will pass him low before he can correct his slide.

The throttle plays a more important part in controlling a sprint car than the steering wheel A left turn is made by turning the front wheels to the right and using enough power to make the back end of the car slide to the right.

Jud Larson is an expert at this. Jud told me, in his slow drawl, “if the engine would ever quit when I’m making a turn, there is a good chance that I would go over the wall.”

Then he laughed and said, “that is why I like to have a good mechanic.”

Sunday afternoon the crowd will be at Rossburg, Ohio, it is worth the hundred mile drive over there to see them.

It is a lot more exciting than a “taxicab” race on a 2.5-mile road course.

For those that are interested Carl Williams, Jud Larson and Dee Jones won the heat races Sunday. Chuck Engle took the 10-lap consolation, and a newcomer to USAC, Red Riegel, won the 30-lap feature.

Dick Aikens did a spectacular flip in the main straight away but escaped with a few bruises.

If you decide to go Sunday be sure to take your nerve pills.