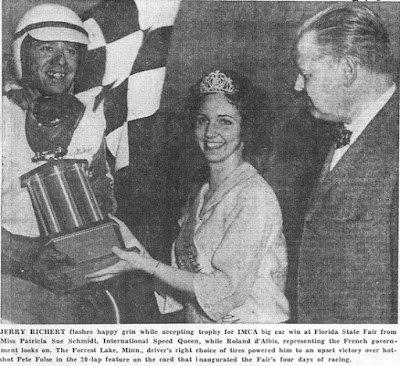 
Tampa, Fla. – Four days of racing would be in store at the Florida State Fairgrounds’ half-mile, Plant Field, February 7-17.


A split-decision in the pits and the absence of a cigar-chewing veteran would play a key role in the season opener on February 7 as the IMCA sprint cars kicked off the 1962 campaign before a chilly crowd of 5,200.


Despite the finish, Folse was still able to crack a “wait until next time” grin afterwards. “I couldn’t get enough bite on the track,” was his explanation.


Folse had won his heat and the trophy dash that afternoon, both in high fashion, using knobby tires. He had found a cushion on the high side of the track and had been riding the groove the whole way in both races. “And that’s the way I had planned to run the feature,” he said.


Richert had other plans, though…


“I was using I.V. slicks and decided to keep to the inside groove the whole way,” he said. I sort of felt Pete couldn’t keep to the cushion the whole time, the track changes too much after every race.”


Richert proved to be correct as early on Folse stayed with the lead pack but at the halfway point, the groove on the high side disappeared and Folse was forced to move to the low side of the track and spend the remainder of the race blocking cars just so he could maintain his fourth position.


“Well, we ran the right race for half the distance,” he remarked. Only problem was, it was the wrong half.”


Despite the fact that the majority of drivers agreed that it was one of the strongest fields in recent Winter Nationals memory, there was definitely something missing. Emmett “Buzz” Barton of Tampa, had decided to retire from racing at the end of 1961 and his absence was felt. Barton and Folse had put on some memorable races at the fairgrounds the last three seasons.


The crowd was brought to their feet twice with nerve-shattering flips.


Ernie Borelli, a 23-year-old driver from Brooklyn, N.Y., climbed his Chevy up the north wall, knocking out several panels. He was pulled from the wreckage undaunted, unfazed and unhurt.


The second flip involved a special four-wheel drive engine piloted by none other than the oldest active driver in the field, “The Kentucky Colonel”, 53-year-old Bert Hellmueller of Louisville.


Hellmueller also wowed the fans with his own version of wall climbing, this time on the south wall. His Ranger Special #48 slammed the retaining wall, flipped twice, and coughed up the veteran, spilling him on the center of the track. His safety harness had snapped, and he was in danger of getting hit by traffic.


It was then that oncoming Ed Terry of Plainfield, N.J., spared Hellmueller’s life. “I saw a body flipping in the air, so I intentionally spun my car, so everyone would avoid hitting him…and I’d do it again.” 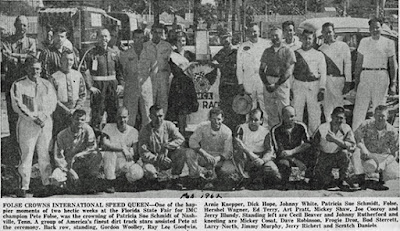 A 42-year-old grandfather would be the class of the field on Saturday, February 10. Herschel Wagner combined the skill of a veteran with the spirit of a rookie to win the 25-lap feature in record time.


Wagner found the groove high on the outside and proceeded to paint the concrete retaining wall and top board fence with hundreds of pounds of dirt thrown from his digging tires. He passed all but two of the 16 drivers in the field before starter Johnny Hicks gave him the checkered flag.


After the race, Wagner commented that the deep digging knobbies made all the difference. “I decided to stick with the knobbies no matter what. The last time (Wednesday) I did it, I lost out.”


While Wagner was way out front, two Midwestern drivers staged another wheel-to-wheel battle. Much like Wednesday’s show, Jerry Richert, and runner-up Johnny White, were bumping and grinding on each other. This time, however, White, driving the Chet Wilson #71 Offy, would get the best of Richert, piloting the McDonald #63 Offy.


Pete Folse was dogged again by mis-fortune. He burned a piston in the second heat and never fully recovered, missing the main event.


Heat races were won by Mickey Shaw, Arnie Knepper of Belleville, Ill., and Al Logan of Los Angeles, Calif. Bud Sterrett of Los Angeles, driving the other Chet Wilson Offy, won not only the 5-lap match race but the 10-lap consolation as well.


You can’t keep a good man down and everyone knew, sooner or later, that Pete Folse would get his licks in. 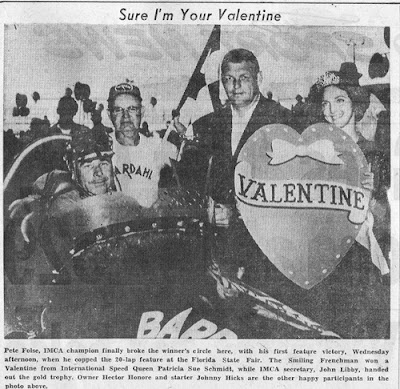 Before a crowd of 5,500, the three-time IMCA national champ took Johnny Hick’s green flag and ran away from the field, leading all 20 laps on Wednesday, February 14. Saturday’s winner, Herschel Wagner, lined up behind Folse and followed in the winner’s shadow the whole distance. The time of the race was 9 minutes and 27 seconds.


Folse had several things going for him after two dreadful showings the previous outings. He geared low for a quicker getaway and he had a pair of dragster tires with a special tread on the rear wheels.


The wide tires provided enough traction in the turns and straightaways to keep Wagner from mounting a challenge. For his part, Wagner seemed satisfied to hang back and keep his second-place position on the track.


The battle of the feature was behind the two frontrunners, Johnny White and Dick Hope. Hope started 12th and had dodged, slipped and slid his way to the fourth spot. He pulled up on White and for the final three circuits, and then waged a nerve-wracking wheel-to-wheel duel right down to the checkered flag.  At the end, White was in front by mere inches.


Folse would close out the ’62 Winter Nationals with another feature victory on February 17. The win would clinch the Florida State Championship and send Folse north with the point’s lead in his quest for a fourth IMCA national title.


Folse would win despite some anxious moments in the closing laps as Johnny Rutherford was gaining on the leader. According to Folse after the race, he heard a car behind him, but thought it was a lapped car. When Rutherford got close enough for Folse to see who it was, “Pistol” Pete stomped the gas pedal to the floor and took the Honore Offy to the cushion to widen his margin.


Despite the point lead, Folse would not successfully defend his title. In a see-saw battle that would come down the last race of the season, Johnny White would be crowned the new IMCA sprint car king at the end of the 1962 season.