Omaha, Neb. - The IMCA Deery Brothers Summer Series went west for three years back in the early 90's with stops each year at the Audubon (Iowa) Speedway. By going that far west and that close to Omaha, they drew the attention of the Kosiski racing clan and that would lead to three wins in three years for the Omaha racing family. 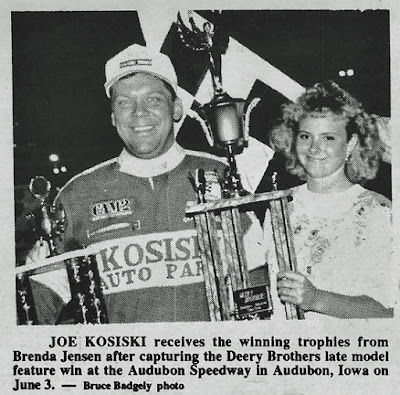 The first Deery Brothers visit to Audubon came on June 3, 1992 with 36 participants signing in for the action. Heat race wins went to Jeff French of Adel, Darin Burco of Independence, Darrel DeFrance to Marshalltown and Joe Kosiski of Omaha, Nebraska. B feature wins were registered by Terry Ryan of Davenport and Frank Jorgensen of Carroll. The field was then filed out with the Speedway Motors Hard Charger, Tim Cooney of Corning and Grundy Center's Les Verly on a provisional. That set the 24-car field for the feature event.

When the green flew Mike Smith of Jewell grabbed the lead and Smith built up a sizable advantage before being brought back to the field with a caution flag on lap 18. Joe Kosiski had started sixth and by the time the caution waved, had moved into second. When the green was waved again Kosiski powered by Smith to take the lead, a position he would never surrender.

1991 IMCA national champion Jeff French also got by Smith and pressured Kosiski throughout the last third of the race but was unable to make a pass and settled for second. Following Kosiski and French to the checkers were Mark Wyman of Papillion, Nebraska, Ed Kosiski of Omaha and Darrel DeFrance. 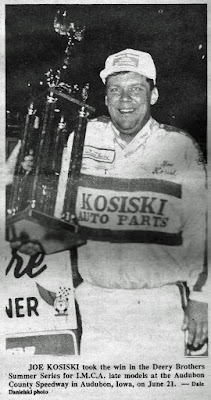 The Deery Brothers returned to the Audubon Speedway on June 21, 1993 and the results were the same as the year before. This time however, Joe Kosiski did it the hard way. He qualified for the 40-lap feature by winning the second B feature which gave him the 18th starting position.
When the green waved for the feature, Cedar Falls’ Jeff Aikey went to the front but by lap nine it was Marshalltown’s Darrel DeFrance taking the top spot. Soon DeFrance started distancing himself from the field, but Kosiski was on the move. By lap 14, he was in seventh and on lap 23 he took the lead from DeFrance never to surrender it for the duration of the event.

Actually, on lap 19, Jeff French had taken the lead from DeFrance but had a right rear tire go flat which sent him to the pit area. French was moving up again through the field again but was involved in an accident which ended his night. By leading lap 20, he received the Mac Tools Challenge jacket.

After taking the lead Joe Kosiski was about to receive a real challenge from his brother Ed. Ed had picked off cars in the same fashion as his brother Joe had and by lap 36, he was in a position to challenge. The two battled it out side-by-side for four laps with Joe barely nipping Ed at the wire. Joe Kosiski received $1,000 for the win plus $100 product certificates from both Isky Racing Cams and Tilton Engineering.

Greg Kastli of Waterloo put on a run that was equally impressive to the Kosiski Brother’s run. Kastli started in 26th and last position and passed 23 cars to finish third. Kastli earned the $100 Speedway Motors Hard Charger Award for his efforts. Kastli also received a $100 certificate from FRC/Featherlite for finishing third, which was the number drawn in the nightly Deery Brothers draw. Rounding out the top five were DeFrance and Terry Ryan of Davenport.

Heat races went Lynn Richard of Mt. Pleasant, Jeff French of Adel and Ryan. Dwight Wrich of Omaha won the first B feature. Kosiski’s win snapped a 14-race streak of different winners in the Deery Brothers dating back to the 1992 season when he won at Audubon. 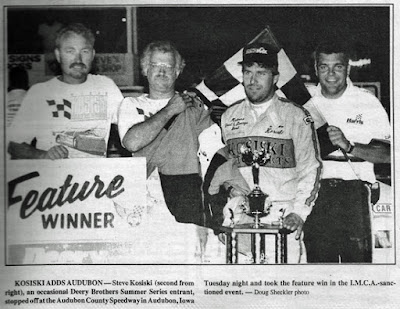 The Deery Brothers Summer Series made its third and final stop at Audubon on June 14, 1994 with another Kosiski victory being registered, but this time it was brother Steve going to victory lane. Once again, a number of cars had a shot at the win, but Steve Kosiski was able to hold off all challengers.

Craig Jacobs of Urbandale grabbed the lead as the race started, but Steve Kosiski was glued to his rear bumper and on lap four he took over the point. The pair ran one-two until Rich Wendling brought out the caution on lap nine. After the restart, the man on the move was (you guessed it, brother Joe Kosiski). He moved by Jeff Aikey and headed for the front.

On lap 17, Joe took third from Mark Wyman and brought Darrel DeFrance with him. This was about the time that Summer Series point leader Gary Webb of Davenport was starting to make his charge, which brought him to fifth just behind DeFrance. Then on lap 24 just as he appeared to challenge his brother for the lead, Joe Kosiski went pit side with mechanical issues.

This made it a battle between Steve Kosiski, Jacobs, DeFrance and Webb. The four stayed the same until lap 29 when Webb passed DeFrance and moved into fourth and started to challenge Jacobs. Having gone relatively unnoticed because of the battles upfront, Ed Kosiski was making his move and on lap 34 he took fourth from DeFrance.

About the same time, Webb got by an ailing Jacobs, who dropped from the race. The top three Steve Kosiski, Webb and Ed Kosiski would remain that way to the end with Donnellson’s Kevin Cale grabbing fourth from DeFrance with three laps to go. The top five at the checkers were; Steve Kosiski, Gary Webb, Ed Kosiski, Kevin Cale and Darrel DeFrance.

Bill Baldwin of Bellevue, Nebraska was the lucky driver selected for the REAL Racing Wheels $500 bonus. Baldwin had four REAL Wheels mounted on his car and was in the selected finishing position. Craig Jacobs received the $50 Racemart Tough Luck Award as he was running second in the feature late in the race and had the engine let go. Gary Webb with a second-place finish extended his Deery Brothers points lead to 36 over Kevin Cale.

The IMCA Deery Brothers Series never returned to the Audubon Speedway which has since quit holding circle track races. But for three years, the Deery Brothers drivers and the invaders from Nebraska put on some great racing at the 4/10-mile facility.