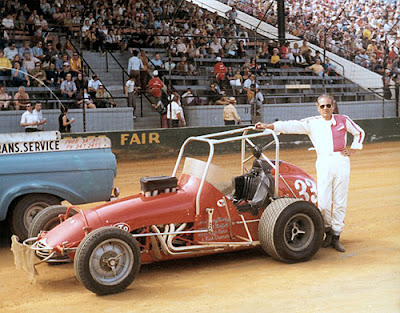 
Blundy did it like a champion should, leading the final 19 of the 25 laps, after establishing himself the fastest man at the track in qualifying with the top time of 25.671 seconds on the half-mile dirt.


Behind him, as he caught the checkered flag of starter Johnny Hicks, was Ron Perkins of Wood River, Ill., who passed Chuck Amati of Greenfield, Tenn., on the final lap to garner runner-up honors while Amati settled for the “show” spot.


Amati, a newcomer to Tampa racing, won his heat, a match race and was barely beaten out for second place by Perkins in the feature. The two staged a wheel to wheel duel during the late laps in the race.


Blundy survived a first-lap tangle with Buzz Barton of Tampa and Benny Rapp of Toledo, Ohio to come from his sixth-place starting position and gain the victory. The brush with the Barton car caused him to lose his front bumper and some grill work, but did no serious damage.