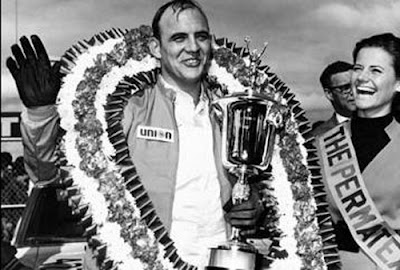 
In second place, but nearly a lap behind, was Iggy Katona of Willis, Mich., driving a 1969 Dodge. Katona grabbed the second spot when Hampton ran out of gas in his 1969 Dodge and coasted to a third-place finish.


During a 35-lap duel with Katona for runner – up honors, Hampton once spun wildly on the grandstand straight, slid nearly 300 yards through the infield and back onto the track on the west bank, to get back in the race against Katona.


Ramo Stott of Keokuk, Iowa, finished fourth in a 1967 Plymouth and Sal Tovella of Chicago was fifth in a 1969 Dodge.


Les Snow’s 1969 Plymouth blew its engine with five laps go and Snow, who had been running with, the leaders all day, watched the checkered flag from the pits. The Bloomington, Ill., driver placed sixth.


On lap 21, Jack Shanklin of Indianapolis rolled four times when the engine in his 1967 Dodge blew entering the first turn. Shanklin was not seriously injured but was treated for shock. Shanklin’s was the only bad crash of the day, but only 13 of the 35 starters finished the race.