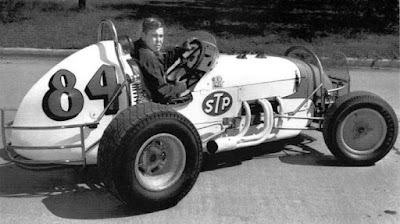 Roy Bryant - Photo Courtesy of Kansas Racing History
Belleville, Kan. (May 30, 1969) - A 'sell-out' crowd watched Roy Bryant and Joe Saldana dominate the Memorial Day races at the North Central Kansas Free Fairgrounds half-mile oval last Friday.
The day was marred by one accident during warm-up laps before the time trials. Ted Foltz of apparently lost control of his car on the first corner of the track, flipping to the inside of the track. Foltz was admitted to the and dismissed Sunday after treatment of minor injuries.
Roy Bryant of and Joe Saldana of , dominated the day's events.
Bryant was the top qualifier at 20.27 for the half-mile – six hundredths of a second off the track record. He also won the trophy dash.
Saldana won the first and third heat races and feature.
Top qualifiers were Bryant, Dale Reed of at 20.37, and Jan Opperman of in 20.60 and Saldana at 21.07.
Placing in the first heat race was Saldana, Chuck Kidwell of , in the Belleville Goodrich Machine Shop Chevy, Bryant, and Dave Ross of Jetmore, fourth.
Top four places in the second heat race were Lonnie Jensen of , Dick Bloom of , Eddie Chrisma of , and Jim Golden of
Third heat finish was Saldana, Bryant, Jensen and Dan Dasher of . Opperman won the semi-feature 10-lap event. Reed, Ross and Harry Ivers of , Colo followed him.
In the final main feature event it was Saldana again first. Opperman, Jensen, Reed, and Ross in fifth place followed him.
The Chamber of Commerce Fair Amusement Committee members termed the races excellent with near record times. The crowd was a "sell-out" and possible record breaker, according to the committee members.