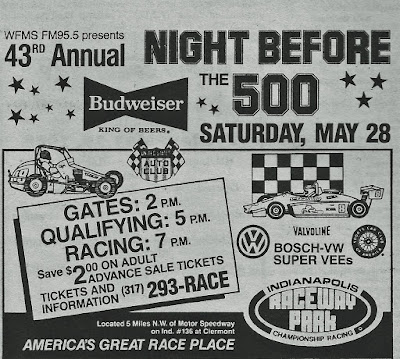 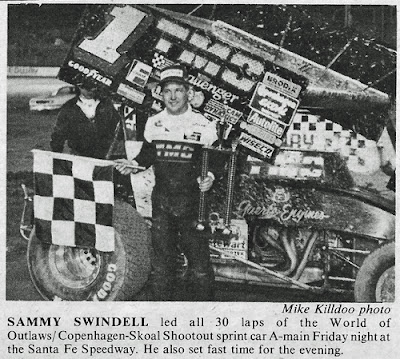 Sammy Swindell outsprinted Dave Blaney into the first turn to gain the lead on the opening lap and then went on to lead all 30 laps  in the World of Outlaws Copenhagen/Skoal Shootout sprint car feature at Santa Fe Speedway on Friday evening, May 13. Swindell, who ran the first sub-15 second lap in the history of Santa Fe Speedway during time trials (14.846 seconds), never relinquished the lead as he went on to take the checkered ahead of Blaney, Steve Kinser, Jac Haudenschild and Bobby Allen.
Bob Hill shattered any plans Jeff Aikey had of winning four features in a row by winning the IMCA late model main event at Marshalltown (Iowa) Speedway on Friday night. Aikey and Denny Osborn dogged Hill the entire race but simply didn’t get the opening they were looking for. They would take second and third respectively while Mitch Fretheim and Greg Hunter took fourth and fifth. In IMCA modified action, Timm Jensen won a three-car battle and took the checkers ahead of Bob Thompson and Dude Thompson. Jeff Schroyer, the man to beat all season in the IMCA stock car division, came from his fifth row starting spot to claim yet another win while Kenny Miller won the bomber main event.

Brent Prior of Hillsdale, Ill., who had won the IMCA modified feature two weeks ago, showed he was the man to beat again winning at Princeton (Ill.) Raceway on Friday night. Prior, who started on the inside of row four, worked his way quickly to the front and took over the top spot when previous leader Jeff Graybill of Princeton dropped out on lap 11 with mechanical issues. Prior was not seriously challenged after that winning handily over Rick Hixson of Coal Valley, Darrell Harmening of East Moline and Jack Lueth of Davenport, Iowa. Marty Thompson of Mineral, Ill, had no problems in winning the 12-lap street stock feature, his second of the season.
Steve Holthaus won his first hobby stock feature in nearly two years at Fayette County Raceway in West Union on Friday night. Holthaus started the feature on the pole but relinquished the lead to a determined Brian Dinger. Dinger lead all the way to the last lap when Holthaus nosed past Dinger right at the checkers. There was no catching Dan Bohr in the modified street stock feature as the Decorah, Iowa, driver won by more than a straightaway at the checkers. Dave Thorston had his limited late model working like a gem as he came out on top in the 20-lap feature. 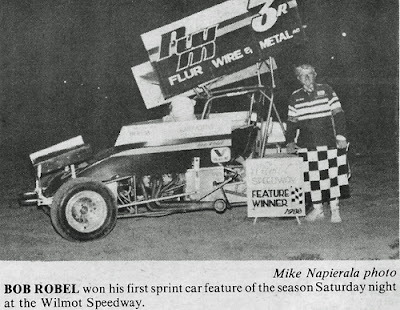 Bob Robel captured the non-stop 25-lap Interstate Racing Association (IRA) winged sprint car feature on Saturday night, May 14, at Wilmot (Wis.) Speedway to chalk up his first victory of the season. Kim Mock led the first 5 laps of the event before Frank Filskov took over for 5 circuits. Robel charged ahead on the 11th round and maintained the top spot to the wire. Filskov, Gib Wiser, Joe Roe and Mock rounded out the top five.
Butch Hanssen of Sioux Falls, S.D., put it all together Saturday night as he roared to the limited sprint car feature win at Lake County Speedway in Madison, S.D. Hanssen, who had been plagued by mechanical issues the previous two weeks, built a large lead early in the contest and cruised to victory over runner-up Kenny Hansen. Tom Rook, in only his third start behind the wheel of a sprint car, raced to an impressive third. In street stock action, it was five-time track champion Marty Barber of Sioux Falls winning his third consecutive feature. Defending champion Leland Boehring of Sioux Falls captured the wreck-marred bomber main event.

Terry Gallaher took home the $1,050 payoff by winning the NASCAR late model feature at Capital Speedway in Holts Summit, Mo., on Saturday night. Gallaher’s in was the headliner for the Winston 50 Spring Spectacular. Defending NASCAR late model track champion Dick Crane crossed the finish line in second followed by Steve Fraise, Jim Swank and Dan Dickey. In other action, Howard Hall would win the modified feature and Don Cox went home with his second bomber feature win of the season. 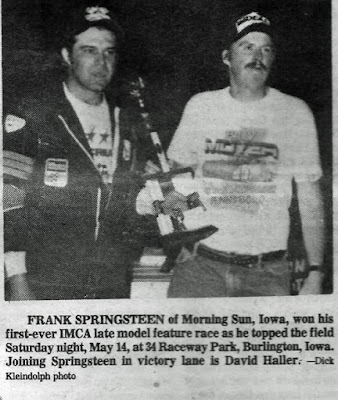 Frank Springsteen of Morning Sun, Iowa, held off a late charge from Ted Pallister of Wapello, Iowa, to win the IMCA late model main at 34 Raceway in Burlington, Iowa, on Saturday night. Dave Warth held the lead for the first 16 laps before Springsteen slid by on the backstretch. Pallister tried the cushion in the final laps but it was Springsteen who took the checkers for the first time this season. Keokuk’s Lance Stott prevailed over Jeff Laue in the sportsman feature. Although he won a track championship two years ago, it was the first-ever win for Davey Newcomb of Morning Sun in the modified contest. Mike Jones of Monmouth, Ill., was the pro stock winner while Danny Fielty of Burlington and Jim Connolly of Wapello split a pair of hobby stock features. 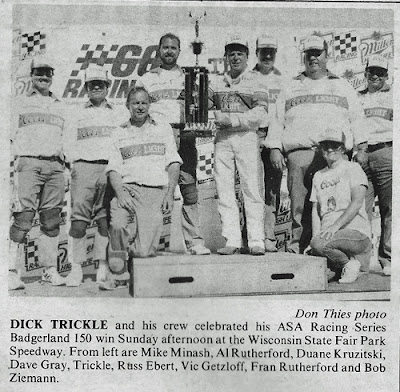 Veteran Dick Trickle edged Ted Musgrave by one-half second to win the ASA Racing Series Badgerland 150 at Wisconsin State Fair Park on Sunday afternoon, May 15. Trickle, driving the Coors Light Silver Bullet Chevrolet, won for the fifth time on the Milwaukee Mile in front of a home state crowd of 17,010. The Wisconsin Rapids, Wis., hot shoe cashed in $7,975 out of the $66,838 purse in collecting his second series win of the season. 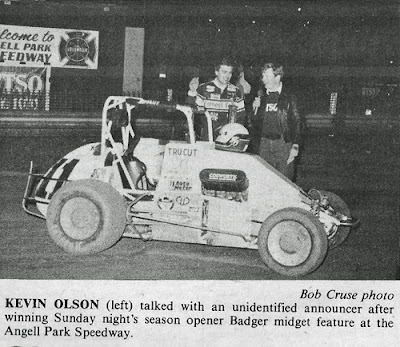 Defending Badger Auto Racing Association champion Kevin Olson opened the circuit’s 1988 season with a victory in the 25-lap feature at Angell Park Speedway on Sunday evening. Olson needed only 3 laps to charge from his 11th starting spot to third place behind leader Hans Lein and Scott Hatton. After Olson and Steve Knepper moved into second and third respectively, they joined the front running Lein in pulling away from the rest of the field. After a couple of mid-race restarts, Lein yielded the top spot to Olson on lap 17 who pulled away for the easy win. Knepper, Kevin Doty, Don Tyler and Lein completed the top five finishers.


In the modified main event, Mike Guttormson of Austin, Minn., and Ron Jones of Zimmerman, Minn., put on a show for the fans at the season opener at Dodge County Speedway in Kasson, Minn., on Sunday night. Guttormson led the entire way but it wasn’t easy as Jones moved up quickly from his fourth row starting position and raced Guttormson side-by-side for most of the contest. Guttormson would manage to hold Jones of by mere inches for the win. Dave Tradup of Elgin, Iowa, would sweep the hobby stock action, winning both his heat and feature.