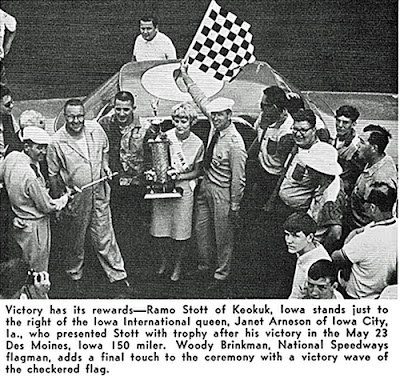 
A yellow flag, one of three flapped briefly during the 300-lap grind, may have decided the finish of the race, which was run off in the second fastest time of its history; 2 hours, 35 minutes and 39.36 seconds.


Derr, 42-year-old veteran who finished second by two laps; had Stott on his rear bumper in a hot battle when he spotted George Barton in a stall on lap 211and decided to pull in for more fuel.


Derr had the mistaken idea the yellow flag would appear by the time he reached the pits. But it took another lap before head flagman Woody Brinkman noticed the stall and switched on the caution signal to slow the field down and put the no passing rule in force.


As Derr sat in the pits, Ramo gained a full lap before the yellow signal appeared. Derr wasted only 22 seconds getting back out, but was caught again, this time by the green go-ahead signal.


Ernie didn't see it in time, since he had passed the flagman and the signal light near the first turn. Ramo, in back of Derr, did see it and roared past again.


Shortly after that Derr’s Dodge, bouncing over the waves of the turns, broke a sway bar and wrecked any hopes he had another of catching Stott's Plymouth.


"I guess you'd have to say I was beat on the track," declared Derr, who has yet to win the International Motor Contest Association's prize plum of $1,100, which Ramo won in the front of an announced crowd of 8,250, smallest in the nine-year history of the event.


Stott surrendered the lead only once, on a 20-second pit stop on the 188th lap, and ran the second-fastest time he's had in the 300-lapper here. He was slightly over his winning time of 2 hours, 29 minutes and 59 second record he set when he won in 1961.


Ramo claimed the pole position with a 27.10-second lap and never let Derr or Johnny Beauchamp get within a car length until he made his first pit stop, a 17 second stop over on the 126th lap. Stott got out before Derr could catch him on that one.


Beauchamp and Derr had a lively battle until Johnny stopped on lap 118 complaining about a kink in his back. Attempts to refit the seat in Ramo’s second car to Beauchamp’s big frame failed and he rode on until he was forced to quit, giving up the car to Blaine Morrow of Joy, Ill.


"I wouldn’t have turned another lap for a million dollars," sighed Beauchamp, a former IMCA national champion and "300" winner, hoping to make a comeback in late model racing this season.


Only 10 cars finished the race on a track that quickly tore apart under the impact of the heavy cars. Sixteen cars were sidelined because of broken suspensions.


Sonny Morgan of Blue Earth, Minn., who entered his with a new Chevrolet "porcupine" engine, did not show up. Dick Johnson and Buzz McCann, both of St. Paul, Minn., got there late to take part in time trials and were required to start in the back row.