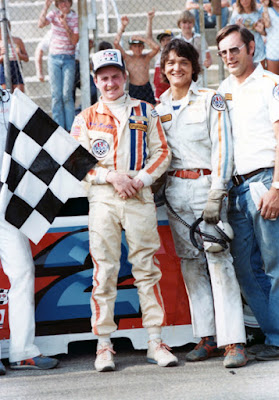 Watertown’s Pat Schauer took early control of the first feature, but Sauter of Necedah emerged from a tight bunch midway through the race to challenge for the lead. He accomplished that on the 35th lap, passing the fading Schauer.

Dick Trickle of Wisconsin Rapids, who, like Sauter, is experiencing a good season on state ovals, took advantage of Schauer's fading act to assume the second place position.

In the second feature, Martin, who hails from Batesville, Ark., and who holds the track record for the fastest lap, took the lead from Rockford, Ill., driver John Knaus on lap 11 and had little trouble the rest of the way.

Joe Shear of South Beloit, Ill., moved up to second place after claiming fifth in the first feature. Trickle managed a third place, while Knaus slipped back to the fourth spot.