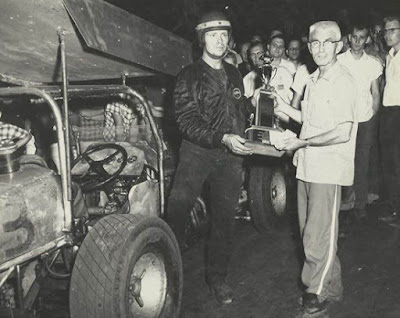 Robbins, who the night before raced to a new track record of 23 seconds flat, drove a modified version equipped with an air scoop.

The scoop, which operates in reverse of an airplane wing by keeping the rear end of the racer on the ground, must have aided the Kentuckian as he won the 25-lap main event going away.

Four of the five heat races were won by drivers who compete weekly at the Knoxville track. Jim Blount of LaPaz, Ind., was the only outside winner in the heat races. Blount won the fifth heat. The other heat winners were; Earl Wagner of Pleasantville, Iowa, Gordon Woolley of Waco, Texas, Thad Dosher of Topeka, Kansas, and Gene Hockensmith of Des Moines.

The main event was restarted three times before the field finally settled down. As a result the feature was delayed and the checkered flag didn't fall until after 1 AM.

The restarts resulted one anxious drivers became tangled in non-serious accidents in the early laps of the 25-lap feature.