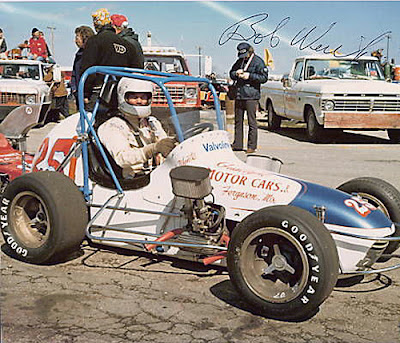 Bob Wente
(July 24, 1969) – Bob Wente moved into the lead with seven laps to go in the 50-lap feature for USAC midgets at the beautiful Elko Speedway and was never headed as he chalked up his 57th career win, tying Bob Tattersall and Mel Kenyon for the honor.


Henry Pens jumped past Merle Bettenhausen on the last lap to secure a second place finish. Merle was the early leader in the race as he led the first 25 laps. He lost the lead to Mike McGreevy as the leaders were overlapping slower cars. Merle bumped into Mel Cornett and everyone was hard on the brakes except McGreevy who found an opening and took the lead. Mike led until the 43rd circuit when his magneto went sour dropping him back to sixth.


Bettenhausen, McGreevy and Wente supplied plenty of action in the early going as the trio fought for the lead. Henry Pens had several battles going as he moved from his sixth starting spot to second on the tight quarter-mile.


Branson set the track record for a 10-lap heat as he won the fourth race with a time of 2 minutes and 24.97 seconds. All distances were new records as it was the first time to the track for USAC.


Strickland set fast time with a lap 14.15 seconds and came from the last row to win the first heat.  The Linne cars were one-two in the trophy dash as Pens took the event over Kunzman. Mel Cornett won the second heat and Joe Demko took heat number three. John Deering won the semi-main.