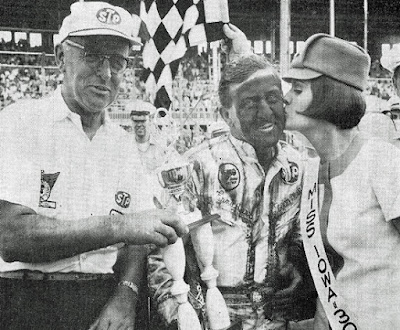 Stott, driving a 1967 Plymouth Roadrunner, led for 203 of the 300 laps and held nearly a three-lap advantage over Derr on the 95th lap. Stott’s collision with Ole Brua and later spinout were the breaks Derr needed for his victory in a 1968 Charger before 12,300 fans.

Stott’s bad luck wasn't over after he fell back into second place on the 236th lap. He had a blowout with 10 laps remaining, which allowed Eaker to take over second. Stott finished third, winning $610 including $60 time trial money.

The lead changed hands eight times and 13 yellow flags were dropped. Three of the yellow were because of accidents. Metal had to be removed from the track six times and twice the race was delayed while push trucks attempted to start cars. Spinouts accounted for the remaining laps.

Three cars were involved in a crash on the seventeenth lap. Irv Janey of Cedar Rapids and Bill Schwader of McCausland were able to continue but Leon Bowman of Wichita, Kan., was sidelined when the front end and radiator of his car were smashed.

Bill Moyer of Des Moines jumped to the lead with his 1968 Corvette, but Stott moved ahead on the second lap. Derr passed Stott on lap 28, but Ramo whizzed by Derr six laps later.

Stott and Brua of Albert Lea, Minn., collided on lap 228 and Ramo spent approximately three laps in the pits while his crewmen pulled a fender away from the left-front tire. Stott zoomed past Derr on lap 236. He spun seven laps later and Derr took the lead for good.

“Man, isn't that a son of a gun,” Stott said after the race. “I don't know what happened but Brua got into my car,” he added, referring to the accident, which accounted for his big lead dwindling.

Derr, the eight-time International Motor Contest Association champion, received $100 for just appearing at the race as the titleholder. He also was paid for being second fastest qualifier.

Eaker had the fastest time, 27.40 seconds. The one-lap record is 25.83 seconds, set last year by Hutcherson.

Hector (Pappy) Honore of Pana, Ill., was honored in pre-race ceremonies for his contribution to sprint car racing during a 32-year career.