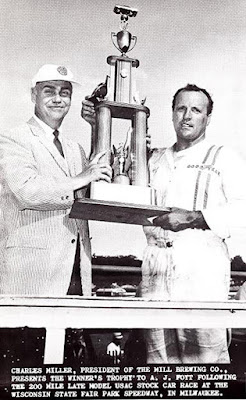 Milwaukee, Wis. (July 14, 1968) - A. J. Foyt, chasing a record purse in Milwaukee's hottest weather of the year, stayed atop the U.S. Auto Club stock car standings with a victory Sunday in the Miller 200 at State Fair Park.

Foyt, of Houston, Tex., had an early duel with Butch Hartman of South Zanesville, Ohio, but took the lead on the 60th lap in his 1968 Ford Torino, and finished more than two laps ahead of runner-up Al Unser's 1968 Dodge Charger.
Hartman had been the top qualifier. The engine went out in his 1968 Plymouth on the 71st lap, and he took over Roger McCluskey's 1968 Plymouth Roadrunner on the leader's 132nd lap.
Foyt averaged 95.897 miles an hour over the mile oval, including 21 laps under a caution flag.
The purse was $51,960, a record for stock cars on a mile track. Foyt won $10,948, and Unser got $6,370.
Foyt also got 400 points toward the standings on the U.S.A.C. stock circuit, and now holds the lead with 1,200 points
The temperature was officially 91, Milwaukee's hottest day of the year to date. And humidity was estimated at 70 per cent, with estimates of the temperature on the track exceeding 100 degrees.
“I was dying,” Foyt said. “It was the hottest race of my career.”
“They threw water on me when I came into the pits,” he said, “but that was good for only four or five laps.”
McCluskey turned his car over to Hartman, and quickly sought out a tub of ice water into which to stick his feet. Hartman finished fourth, winning $2,810 for owner Norm Nelson of Racine. Nelson, in another 1968 Plymouth, had to make three pit stops and finished fifth for $2,017. Third was Jack Bowsher for $4,389.
Don White of Keokuk, Iowa, who had been challenging Foyt for the U.S.A.C. lead, was only nine seconds behind the Texan when his engine overheated on the 176th lap. White, the U.S.A.C. stock car defending champion, finished 20th.
Terry Parker of Chicago was sixth, Jack Knippel of Brookfield seventh, Lamarr Marshall of Louisville, Ky., eighth, Bob Wawak of Villa Park, Ill., ninth, and Dick Trickle of Wisconsin Rapids, Wis., finished 10th.