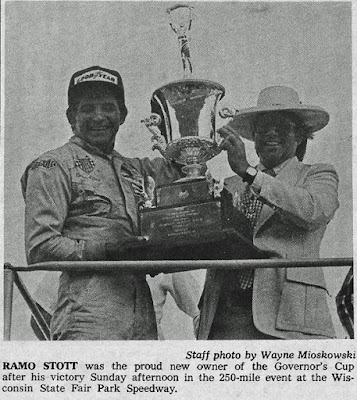 
Stott, driving a 1977 Plymouth Volare, averaged 88.202 miles per hour to cross the - finish line four seconds ahead of Paul Feldner of , who drove a 1974 Dodge Charger.


Stott won $6,727 and moved into second place in the United States Auto Club point’s standings behind Feldner, who leads the standings with 1,525 points. Stott has 1,425. Jim Sauter of , was third in a 1974 Charger and Al Schill of , finished fourth in a 1976 Ford Torino in his first USAC race.


Dave Watson, winner of two of the first three USAC stock car races at this season and Sunday’s polesitter, ran only 112 laps in his 1977 Buick Skylark before being sidelined with a broken crankshaft.


Sal Tovella of Addison, Ill., who had been tied with Feldner for the points lead prior to Sunday's race, completed only 80 laps before blowing an engine.


The race was slowed by 10 yellow flags and 17 of the 31 starters did not finish. Stott was content to sit back and let other drivers lead in the early going.


“There was a point earlier in the race where I could have taken the lead, but I didn’t want it,” Stott said. “I figured right then, with about 200 miles to go, it was too soon to be up there. So I sat back and let those other guys pass me. I let them run their cars hard, while I hung back a bit.”


“I figured the race wouldn’t be decided until the last 50 laps, and if you were around then, you'd have a shot at winning it.”