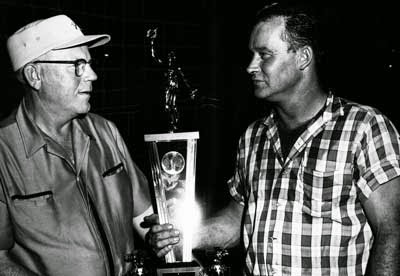 
The 500 laps (270 miles, as track is several yards over a half- mile) were relatively accident-free and no injuries were sustained; however, several drivers asked for relief during the weary grind.


Dudley became ill on 167th lap and Bob James took over while his car was getting a broken shock and U-bolt replaced. Several laps later James pitted the Stacy car and jumped back into his repaired mount and Dick Latham a non-starter took it the rest of the way, doing a fine job.


Nelson Stacy, on the pole gunned into the first lap lead with Dieringer coming from fourth to second - and for 339 laps it was a tremendous duel between the two. The lead changed between them an even dozen times with Dieringer in possession of a lap and a half lead when the right front tire “let go”.


On the pit stop Dieringer got tire, gas and oil but lost lead to Stacy by two laps, this he could not regain as Stacy kept the advantage to the checkered flag. Nearly exhausted Stacy received the huge trophy and cash in excess of $2,000 for his ride.


Shanklin, the 1957 winner, lead footed two cars out of action before relieving Dunlevy. His own racer went 60 laps and was in third place when a busted radiator couldn't be repaired. On lap 157
Willie Holt, Cincinnati, Ohio, running in fourth asked for relief and Shanklin took over shoving it into third place several laps later, but then pulled in with no oil pressure; and when Dunlevy asked for rest Shanklin was nominated.


Jack Farris, New Paris, Ohio, did not start the race, his engine going sour after making his successful qualifying run. Farris won the event in 1955 and 1956.


Iggy Katona, Lambertville, Mich., the 1953 winner, finished out of the first five. Twenty-eight cars started, 11 were running at the end. Tiny Shilts, New Paris, Ohio, in '57 Chevy was riding in 10th when forced out with a broken valve cover bolt on lap 282.