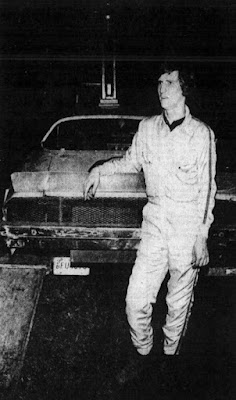 
Waterloo, Iowa (September 4, 1977) - Curt Hansen of Dike breezed to his third stock car track championship of the season Sunday night at Tunis Speedway. Hansen, the Tunis late model regular season point leader, started the 50-lap title race on the inside first row, jumped out to a big lead early and was never challenged.

Runner-up Stan Stover of Reinbeck finished a full straightaway behind Hansen at the end of the race. Only five cars finished on the same lap as Hansen.

Hansen has also captured the track titles at Cedar Rapids’ Hawkeye Downs and the State Fairgrounds in Des Moines. He’s also the favorite to win the Oskaloosa championship, which hasn’t been run yet.

Hansen shouldn’t have as easy a time of it when he goes for his eighth Tunis main event win of the season in Monday night's late model special.

Track promoter Claus Stricker says “a bunch” of new cars have indicated they’ll be in Waterloo Monday night to compete for a $6,200 purse, including $1,500 plus lap money to win the 75-lap feature.

Also, a couple of the top track regulars who were missing Sunday night have told Stricker they’ll be back for Monday night. Both Ed Sanger and Bill Zwanziger, the only repeat feature winners at Tunis this year besides Hansen, were racing out-of-state Sunday night

Sanger, who owns and maintains Hansen’s car, was trying his newly-built stock car on an asphalt race track in Minnesota.

Another Tunis regular, Tom Bartholomew, is out with injuries sustained at the Boone Speedway Friday night. Bartholomew, who suffered a broken vertebra in his back, was on hand to watch Sunday's races.

Since he was the point-leader, he had the option of starting on the inside or outside of the front row. He chose the outside, putting second leading sportsman money-winner Mike Krall on the inside.

Krall ran in first for the initial eight laps before Kastli got around him and went on for a convincing victory in the 30-lap event. Krall finished second with Larry Schmidt third and Moore fourth.

Both late model heats were close. Dave Trower nipped Jack Mitchell in the first 10-lapper while Karl Sanger, driving his brother Ed’s old car, held off a Hansen charge in the second heat.