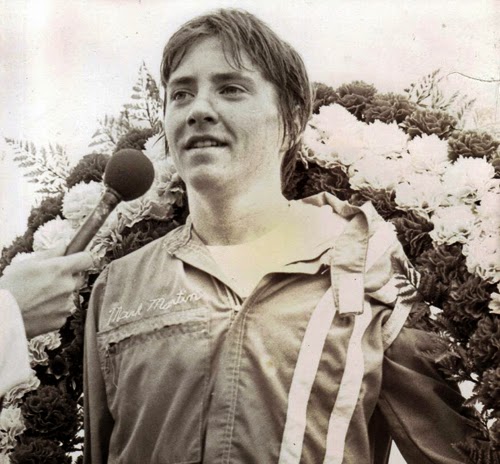 Mark Martin adorns the traditional winner's wreath after winning the National Short Track Championship at Rockford.
Rockford, Ill. (September 25, 1977) - A Razorback from Arkansas, just in his teens, took on the superstars of short track in the 12th annual National Short Track Championships and came out on top to the amazement of many.
Rudolph, Wis., pilot Tom Reffner took his Hornet into the lead on the opening green followed closely by home track favorite and three-time NSTC champion Joe Shears of South Beloit, Ill., and new track record holder (13.594) Dick Trickle of Wisconsin Rapids, Wis., in third. Those three hustlers held those positions lap after lap until Shear’s engine let go on the 76th lap moving Trickle’s Superamerica White Knight into the number two spot.
The mandatory pit stop came during lap 103 and on the restart, Trickle started putting the pressure on Reffner right away. Things were running smoothly until lap 116 and then the complexion of the race changed completely.
As Reffner and Trickle entered heavy lap traffic, they entered turns one and two hard. Ray Young got into Dave Watson, spinning the Milton, Wis., based and defending NSTC champion. Steve Burgess of Eau Claire also became involved in the melee as Reffner made it through unscratched. Trickle braked hard behind Burgess and was promptly tagged from behind, putting his Trans-Am hard into Burgess causing considerable damage.
The yellow came out and Trickle pulled to the pits where his crew quickly installed a new radiator and straightening the bent steering arms getting Trickle back into the action just as the green was waving, putting him at the back of the field but unlapped.
In the meantime, the field had changed and now this young 18-year-old hotshot from Arkansas named Mark Martin had moved his Ed Howe Camaro into second and was now following Reffner and his 380-cubic Hornet around the high-banked quarter-mile track.
Then disaster struck for Reffner on the 176th lap. Looking like a sure winner, he left the track with an overheating problem. From there, it was Martin’s race to win or lose and he showed the skills of a 20-year veteran, and he drove flawlessly over the remaining 20 laps to score one of the biggest wins of his young career.
Another story of the NSTC was the second-place finisher. Dave Roahrig of Plymouth, Ind., started 32nd in the 33-car field and patiently worked his way through the field to take runner-up honors. Third place went to Trickle, who moved back through the field after his lap 116 fiasco.