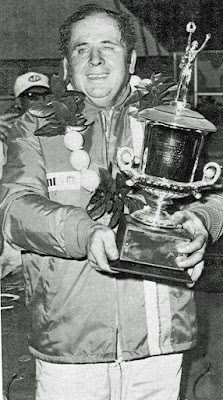 
Katona, a 55-year-old trooper from , had been in contention from the start of this eighth annual classic for Midwestern drivers, but didn't make his big move until after the halfway point. Then he suddenly bolted from fifth place to second, overhauling veteran Red Farmer of Hueytown, , and 43-year-old Andy Hampton of , to challenge the leader, Stott.


He was riding the Keokuk, , champion’s bumper when Stott’s blue suddenly started trailing a plume of smoke as it raced around the 2.5-mile Daytona International Speedway at 175 miles per hour.


Katona raced by and gained the lead on the 82nd lap of the 120-lap affair and he was never headed, although he had to beat down a late charge from Farmer.


Farmer, three-time national sportsman champ, managed to close to within a second of Katona with 30 miles to go. But he chase ended when the driver’s Ford got too high in the third turn and he scraped the wall enough to damage a tire. He lost a lap getting a replacement and finished third, behind Tom Bowsher, 1970 ARCA Rookie of the Year. Fourth place went to Jack Shanklin of and fifth to Hank Teeters of West Jefferson, Ohio.


He became the first driver to win the event twice. He pulled his red and gold Dodge into victory circle and told his senior citizen fan club, “Let’s all go out for a round on the town.”


Katona, an eight-time grandfather, is long past the age when all but a few race drivers hang up their helmets. But Katona was in no mood to talk about quitting.


“Heck,” he said, “I’m just getting started. In fact, this was the easiest race I’ve ever won. It doesn’t bother me to run fast. Matter of fact, the faster I go the better I like it.”