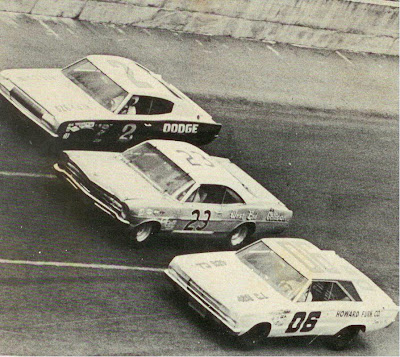 
Five caution flags slowed the pace to 148.372 miles per hour, and the cars finished at a reduced speed under the yellow flag because of a spectacular rolling tumbling collision six lap's before the finish. Neither of the drivers in the wreck - Bobby Mausgrover of , nor Gerry Wolland of , was injured.


The 39-year-old from , had finished second, third and fourth in the previous running’s of the Midwest stock car racing organization’s annual speed week’s race at Daytona International Speedway. In pre-race speculation, he wondered aloud if he’d ever hit the winning spot.

’s winning speed of 148.372 miles per hour was an automatic record since the race was lengthened this year from its previous 250-mile distance. But the fastest average time for the race remained the 1966 speed of Jack Bowsher at 164.053 miles per hour in a 1966 Ford. The series of caution flags on 18 of the 120 laps, three of them because of debris or oil on the track, kept the pace down and gave a chance to make his pit stops under the yellow flags.


Katona, who won here in 1965, also made judicious use of the yellow flag for pitting and was leading with 22 laps to go but made two pit stops within three laps for gas and tires and fell back.