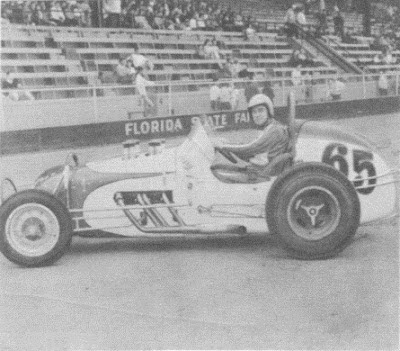 
(February 13, 1965) – Greg Weld of ran off and hid in the Golden Anniversary “50” sprint car race at the Florida State Fairgrounds on Saturday afternoon and became the only driver to win two features in the five-meet event.


While Weld took home two trophies for his feature wins, Jim McCune of won the Florida State Championship on accumulated points, including those points garnered with his second place finish in the feature finale.


McCune received two trophies, the Kennedy Memorial Trophy presented by mayor Nick Nuccio on behalf of the city and the Pepsi Cola Gold Trophy, both for his state championship.


Weld took the lead on the 23rd lap as he and front running Gordon Woolley of charged into the first of the lapped cars. As Weld passed, Woolley’s car broke the drive shaft and the Texan was out of the race.


Weld had his troubles early in the feature, battling to get past McCune into third place and Buzz Barton for the second spot. After getting past Barton for second, he set sail for Woolley, who had built a sizeable lead.


“I was just sleeping in the turns,” he said afterwards. “I have to watch myself on that when I get out front.”


During the first couple of laps, Weld kept signaling to the pits, pointing to his left rear tire. “I was set up for a dry track and the water they put down before the feature made my car react differently,” he mentioned. “I gave my crew the signal that if a red flag came along, I wanted a quick change done to my chassis.”

As it turned out, the track dried out rather quickly and Weld’s machine was handling perfectly as the laps ticked down.


During the presentation of trophies from victory lane, McCune his hardware with thanks and was quick to point out, “I was here last year too but I was running so far back, no one noticed I was here.”