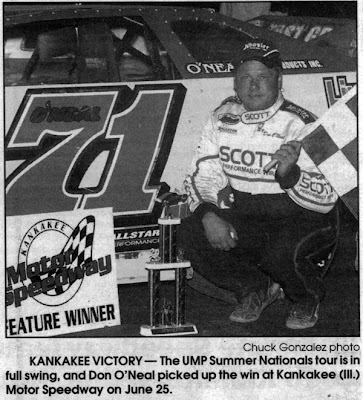 2004 - Don O' Neal made a stop at his personal pay window at Kankakee (Ill.) Motor Speedway on June 25, when the UMP Summer Nationals tour made its annual visit. The Martinsville, Ind., veteran continued his winning ways by disposing of early leader Brian Birkhofer of Muscatine, Iowa on the second lap, then setting he cruise control for the remaining 38 laps. The $10,000 first place paycheck more than doubled his early tour winnings and propelled him into the point's lead. Birkhofer held on for second and Shannon Babb of Decatur, Ill. finished third. 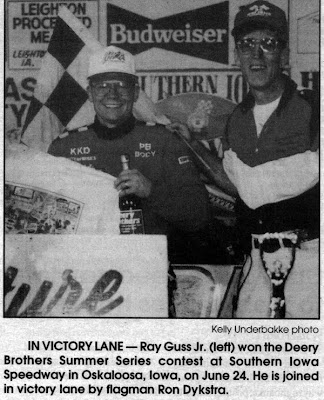 1999 - Ray Guss Jr. of Milan, Ill., won the twice-postponed Deery Brothers Summer Series race at Southern Iowa Speedway on June 24th. Guss' primary pursuit came from none other than Jeff Aikey of Cedar Falls, Iowa, the series's point leader. Guss lined up fourth, took the lead early and battled with Boone McLaughlin of Mediapolis, Iowa before Aikey joined the fray. Aikey's challenges for the front spot would be interrupted by multiple caution flags and Gus would hold off the three-time Deery Brothers champion. McLaughlin, Chris Smyser of Lancaster, Mo., and Harry Walker of Washington, Iowa would round out the top five.

1994 - One week after the heartbreak of a blown motor with a half-lap lead, Al Schill of Franklin, Wis., returned to Slinger (Wis.) Super Speedway on Sunday, June 26th to win the Pat Schauer Memorial 50. The 28-year racing veteran battled a trio of drivers on the world's fastest quarter-mile. Schill swapped the lead several times with Tony Strupp of West Bend, Wis., for the first 30 laps of the contest and then held off both Lowell Bennett of Neenah, Wis., and Conrad Morgan of Dousman, Wis., for the remaining 20 circuits to secure the victory. Bennett, Morgan, Andy Wendt and Jerry Eckhardt, both of Watertown, Wis. followed Schill across the finish line. 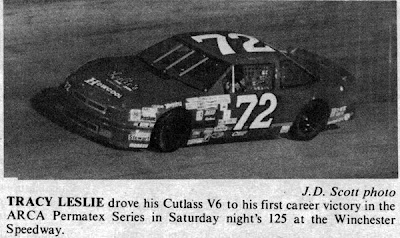 1988 - Rookie driver Tracy Leslie was hotter than the 100 degree temperature at Winchester (Ind.) Speedway on Saturday, June 25th as he scored his first ever ARCA Permatex Series win in the 125-lap feature on a track he had never seen before. Leslie came from the fourth starting position to over take early leaders Larry Moore and Bob Strait for the top spot on lap 44. After that, he put his 1988 Oldsmobile V6 on cruise control, earning the biggest win of his young career. Bob Keselowski, Grant Adcox, Larry Moore and Jeep Pflum rounded out the top five.