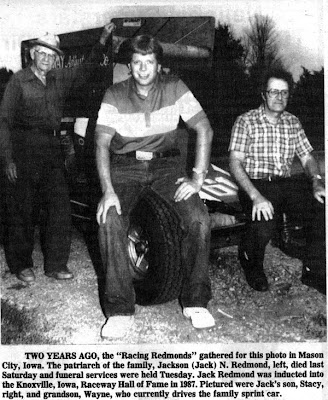 1989 - Jack Redmond, 88, of Mason City, Iowa, passed away from natural causes on June 10. He was a pioneer among race car drivers, owners and mechanics in the Midwest. He began racing motorcycles in 1918, then switched to Model T Fords. In 1925, he fractured his neck in a race, thus ending his career. Later, he became involved with his son Stacy in sprint car racing as well as his grandson Wayne. He was inducted into the National Sprint Car Hall of Fame in 1987. 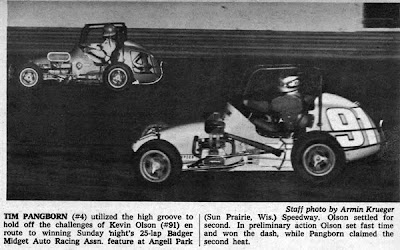 1978 -Tim Panghorn of West Allis, Wis., held off Rockford, Ill.'s Kevin Olson to win Sunday night's Badger Midget Auto Racing Association feature at Angell Park in Sun Prairie, Wis., on June 11. Panghorn surged to a commanding lead early in the 25-lap affair but a caution bunched up the field on lap 13. After the green flag, Panghorn used the high groove while Olson utilized the low side and they waged battle for the remaining 12 laps until Panghorn was able to edge Olson by inches at the checkers. 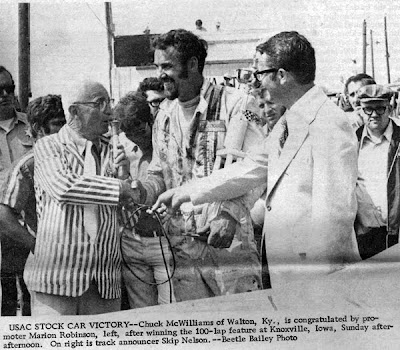 1972 - Chuck McWilliams of Walton, Ky., drove his '72 Plymouth to victory in the 100-lap USAC Stock car race at the Marion County Fairgrounds in Knoxville, Iowa on June 11. The victory for McWilliams was witnessed by 10,500 spectators. McWilliams finished the race on a bald right rear tire but the 36-year-old veteran knew that a pit stop would have been costly. Second place finisher Lem Blankenship of Keokuk, Iowa, made a stop for a tire change earlier and that cost him the win. Ray Bohlander of New Berlin, Wis., Ken Ritter of Louisville, Ky., and Butch Hartman of South Zanesville Ohio rounded out the top five. Verlin Eaker of Cedar Rapids, Iowa was fast qualifier powering his 1970 Dodge Charger around the half-mile in 24.60 seconds. 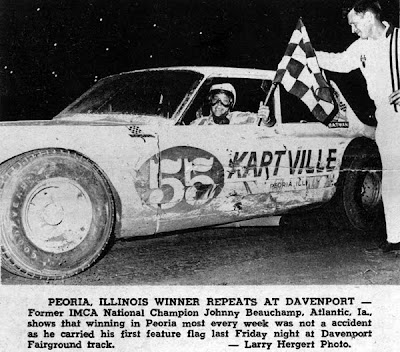 1967 -"The Flying Frenchman" Johnny Beauchamp won the 25-lap modified feature at the Mississippi Valley Fairgrounds in Davenport, Iowa on Friday night, June 9. Beauchamp started in the third row, made his way to the front quickly and won going away. He had no strong challengers throughout the event as Bill McDonough, Lyle Bohne, Jim Gerber and Dean Montgomery rounded out the top five finishers.