Bob Kosiski: The man who started the Kosiski Racing Legend 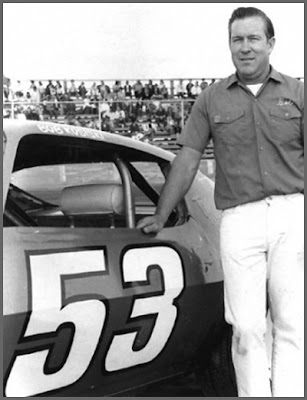 Omaha, Neb. - If you are a Midwest dirt late model fan, then I don’t have to bring you up to speed on the name Kosiski and what it means to racing in the Midwest. For 30 years we have read about the accomplishments of three racing brothers from Omaha, Nebraska, Joe, Steve and Ed Kosiski. But what about the man that started it all, their father, Bob Kosiski.
Bob Kosiski was born on October 15, 1934, in Omaha, and grew up with four brothers and as a teenager worked part-time in an auto repair shop that his father, Joe Kosiske owned. (More about the name change later). Bob got his racing career started almost by accident, in 1950 in Central City, Nebraska when a relative, Stan Williams didn’t show up and so Bob drove the car. “I’ve been hooked on racing ever since,” Bob said.
After graduating from South High School in 1952, Bob started taking his racing seriously. He started racing a 32’ Ford Modified Coupe that his dad owned. They raced at Riverside Speedway in South Omaha, Playland Park in Council Bluffs and Grandview Race Bowl in Bellevue.
In 1953 Bob won his first track championship at Riverside beating out Bud Burdick, Bob Parker and Carl Lillenthal. Bob continued racing Modifieds at Playland, Capital Beach in Lincoln and Norfolk until 1957 when he married his high school sweetheart, Grace. Shortly, thereafter, he started a two-year stint in the service. While he was in the service, they recorded his name incorrectly as Kosiski not Kosiske, and he just never bothered to change it.
After getting out of the service in 1959, Bob returned to racing, but decided to step up a notch and starting racing with the International Motor Contest Association. Driving his dad’s 1959 Thunderbird, he did very well his first-year winning racing at Hutchinson, Minnesota and La Crosse, Wisconsin. Bob finished eighth in points behind legends Ernie Derr, Dick Hutcherson, Darrell Dake and Ramo Stott.
In 1960 Bob started out the season running the Daytona 500 and was doing well until his Thunderbird’s rear end gave out and he retired from the race. He returned home and started running IMCA and on August 29, 1960, scored the biggest win of his career at the Minnesota State Fair in St. Paul, defeating Dick Hutcherson, Ernie Derr and Ramo Stott in the 100-lap feature at the Minnesota State Fair. Bob set an IMCA national 12 lap record that day for half-mile tracks.
Things were going well for Bob, and he scored another win at Madison, Minnesota, but then tragedy struck and Bob’s father Joe, was killed in an auto accident near Rock Rapids, Iowa the morning following the win at Madison. Bob did not race again that year and still was still able to finish fifth in IMCA points that year. The death of his father hit Bob hard, and he came close to quitting racing.
In 1961 he decided to stay closer to home and he began racing at Sunset Speedway. While he didn’t win often early, he began to run better and better running the modified coupes. In 1963, he drove for Ernie Matz in a car that would become Bob’s signature number, 53. They would finish fourth in points. 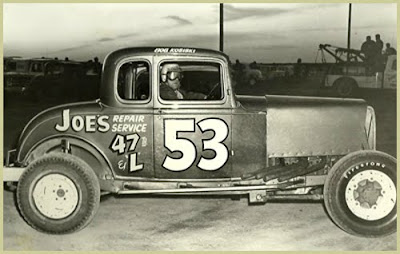 Bob Kosiski ran modified coupes early in his racing career. He's shown here in 1967 at Sunset Speedway - Lee Ackerman Collection
The next year he would finish second to Jim Wyman in points. In 1965 he won the Playland Park Championship, finished third at Sunset and won the Nebraska State Fair Modified Championship. In 1966 Bob drove the Matz’ coupe to track championships at both Playland, and Sunset.
In 1967 and 1968 Bob repeated as Sunset Speedway Champion. In 1968 Sunset introduced the Late Model class as a companion class to the Modifieds. Bob won the track championship in the Modifieds, but on July 2, 1968, became the first driver in Sunset history to win two features by winning both the modified and late model feature. Bob had a tough start to the 1969 season as a stuck throttle but him into the guard rail. Bob suffered a bruised kidney and some cracked ribs and was forced to set out for several weeks.
In 1970 Bob won the track championship at Whitehead Speedway near Nebraska City and was edged out at Sunset by Bud Burdick. In 1971, Bob went on a roll at Sunset that would see him win 7 consecutive track championships. He also won the track championships at Whitehead in 1971 & 72. In addition, he scored major wins at Fairmont, Minnesota, Denison, Iowa, and the Nebraska Fair Championships (the first of five in a row) at Lincoln in 71.
In 1973 Bob won just about everywhere he ran including six straight wins over a two-week period at (Sunset, Harlan and Corning) as well as the Nebraska Late Model Nationals at Doniphan and the Nebraska Fair Championships in Lincoln. 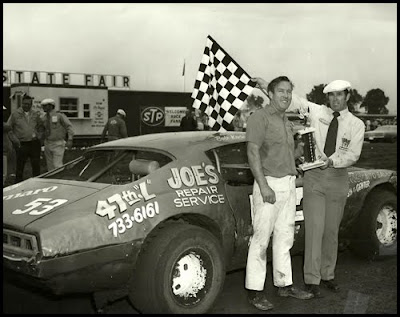 Bob Kosiski accepts the checkers and trophy from IMCA's Gene Van Winkle after winning the Nebraska State Championship in Lincoln in 1973. - Lee Ackerman Collection
In 1974, Bob continued to dominant the competition winning several times at Lakeside Speedway in Kansas City (including the Lakeside 100) also winning at Topeka, Harlan, South Sioux City, the Spring Invitational at Sunset and added another Nebraska State Fair Championship as well. In 1975 he added the Dakota State Fair Championship at Huron. During the 70’s Bob raced against the best in the country at times including Ed Sanger, Curt Hansen, Joe Merryfield, Verlin Eaker and others. 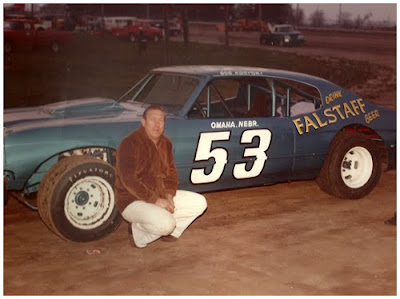 Bob Kosiski traveled all over the Midwest in pursuit of racing excellence. Bob relaxes before a race at Hawkeye Downs Speedway in Cedar Rapids, Iowa in 1974. - Lee Ackerman Collection
Bob would continue his string of Sunset championships in 75, 76, 77 and his eleventh in 1979 and also win the F&J Pleasant Valley Special at the Iowa State Fairgrounds in 1978 before retiring from driving. I did not say he retired from racing.
Since then, Bob and Grace have been fixtures around racetracks throughout the Midwest, helping sons, Joe, Steve and Ed with their racing events. Bob was the engine tuner for the boys and helped them to win many races and championships. In fact, with Bob tuning the engines his three sons would win two National and six Regional NASCAR Weekly Racing Series titles. They would also dominate the NASCAR Busch All Star Tour winning that title twelve times.
Due to their accomplishments Joe and Steve have both been inducted into the National Dirt Late Model Hall of Fame. In addition, Bob remains active in the affairs of the family business, Kosiski Auto Parts as well as helping out at Nebraska Raceway Park (which is part-owned by Joe, Steve and Ed). In the last several years we have seen the next generation of Kosiski’s hit the track. Joe’s son Andrew, Steve’s sons Brian and Robbie and Ed’s daughter Kortney have all began racing locally.
If you go to I-80 Speedway at Nebraska Raceway Park and look down in the pits before the races you will most likely still find Bob under the hood of one of the grandchildren’s race cars tuning the engine.

Bob considers his biggest win to be the 1960 win at the Minnesota State Fair, “I beat Ernie Derr, and Ramo Stott, who I have top respect for, Yep, that was the most memorable,” Bob recalls. His other most memorable race was the 1960 Daytona 500, even though the car broke halfway through the race.
One of wife Grace’s fondest memories is Bob racing one Holiday Weekend. “He raced five times in four days and won all five.” Recalls Grace. Bob was inducted into the Nebraska Auto Racing Hall of Fame in its inaugural year, 1998.