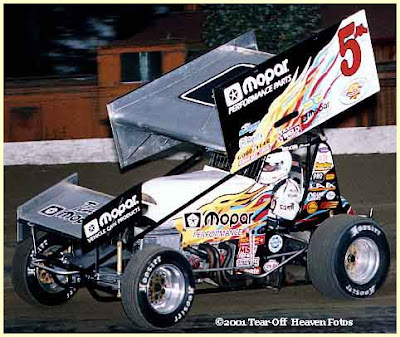 Mark Kinser scored his third Knoxville Nationals title in five years with his victory on August 11, 2000.

2000 - "Give them a couple of reds and they're tough to beat," Donny Schatz said after being passed by Mark Kinser with 4 circuits left at the 40th annual Knoxville Nationals on August 12th. Master mechanic Karl Kinser changed gears and added weight on the red flag periods and that made the difference as Kinser eliminated Schatz's almost full straightaway lead with eight laps remaining. On lap 26, Kinser took to the bottom, caught Schatz on the backstretch and won going away. Schatz would settle for second while pole-sitter Danny Lasoski completed the podium.
1990 - Gary Hieber picked up the $12,150 first place money in Saturday afternoon's 38th annual Hoosier Hundred at the Indiana State Fairgrounds in Indianapolis on August 11. A flat tire slowed hometown favorite Andy Hillenburg, who had dominated the first 96 laps of the Valvoline/USAC Silver Crown affair, with just four circuits remaining. After the finish, the crowd of 8,000 roared when Hillenburg, who limped home in 14th, climbed from his car, walked over and shook the winner's hand. Jimmy Sills would finish second and Wally Pankratz took third. 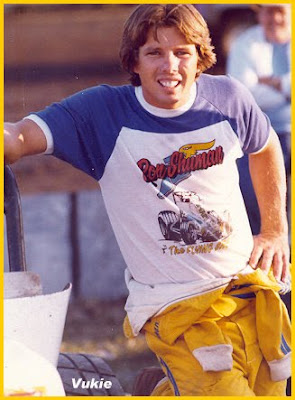 1979 - The "Flying Shoe" Ron Shuman of Mesa, Ariz., was in high gear on Saturday night and claimed the $5,000 first prize in the 19th annual Knoxville Nationals on August 11th. Shuman started in the third row of the 30-lap event and trailed pole sitter Tim Green and Shane Carson early in the event. After a lap 9 caution bunched the field, Shuman moved by Carson a couple of laps later for second place. Shuman applied pressure to the leader until lap 14 when Green's engine when sour and he was forced to retire. Shuman inherited the lead and sailed home to victory. Knoxville season point leader Randy Smith of Norwalk, Iowa took second and Sammy Swindell of Bartlett, Tenn., grabbed the third spot.
1973 - Kenny Weld of York, Penn., driving the Weikert Chevrolet, won the Knoxville Super Modified National Championship for a record fourth time before an overflow crowd at the Marion County Fairgrounds on August 11. Taking the lead from the drop of starter Marion Robinson's green flag, Weld was never headed in the 30-lap contest. Jan Opperman of Beaver Springs, Penn., finished second and Bobby Allen of McSherrytown, Penn., took third giving the Quaker State a podium sweep.